NDR Radio Broacast Vans in Hanover
For the past 13 years, NDR’s Ü30 OB van has handled the station’s radio broadcasts, primarily working on classical concerts. On board: a Lawo mc80. Now, the vehicle is due to be replaced by a new Ü30, whose centrepiece will be a mc²66 – once again from Lawo.

“Norddeutscher Rundfunk’s new Ü30 is designed purely for use as a music OB van and, as its predecessor, will be used almost exclusively for classical concerts. Apart from recordings and live broadcasts of classical orchestral music, some operas, as well as big-band and pop music concerts, will also be produced,” explained Peter Dewald, Head of Production and Radio Broadcasting at NDR, when asked about the new Ü30’s area of operation. In April, the OB van will set out on its first production.

A three-axle vehicle with a separate driver’s cabin, the new Ü30 is the largest radio OB van in NDR’s outside broadcast fleet. It is a ‘standard vehicle’ without frills, but fully equipped with state-of-the-art technology for its intended role. The van interior consists of three sections: a control room with a mc²66 for one sound engineer and one balance engineer, as well as an audio engineering compartment for one technician and two guests; in addition, there is an equipment room for the 19” rack-mounted equipment. 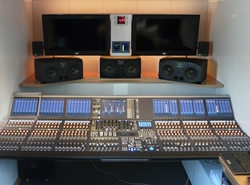 The Ü30 van is equipped with two Lawo consoles – a mc²66 and a zirkon – as well as nine DALLIS I/O systems, including four stage boxes. An additional DALLIS frame is assigned to the zirkon. The mc²66 will be used as a production console, while the zirkon serves as a broadcast console. In addition, simultaneous processing of the 5.1 surround and stereo output takes place here.

The mc²66 features 56 faders (24-8-24) and 192 DSP channels with full signal processing. The HD-core router has a capacity of 8000 x 8000 crosspoints. All stage boxes are connected via four fibre-optic cables and four Fiberfox connectors. In order to enable a bidirectional video and Ethernet connection to the stage, fibre links for the two large stageboxes use WDM (Wavelength Division Multiplexing) technology. The power supplies, the DALLIS controllers in the stage boxes and, partially, the DSP in the HD core, are designed redundantly.

As well as the Ü30 van, NDR’s Studio 4 in Hamburg, responsible for the production of features and children’s programs, as well as the master control room in Hanover, have also been equipped with Lawo products within the last two years.

Lawo, headquartered in Rastatt/Germany, specialises in developing, designing and manufacturing mixing consoles and matrix systems for radio and TV broadcasters, as well as for use in live events. Standards of high quality and innovative technology are supported by decades of experience in the field of professional audio technology. In 2010, the company celebrates its 40th anniversary. Lawo’s product range covers digital audio mixing consoles for use in radio, broadcast, production and live applications, including the required software. In addition to the provision of matrix systems and audio networks, Lawo also carries out project engineering tasks and acts as a main contractor for radio OB trucks; these services include user training and maintenance. This high level of expertise results in a comprehensive support service for Lawo customers.