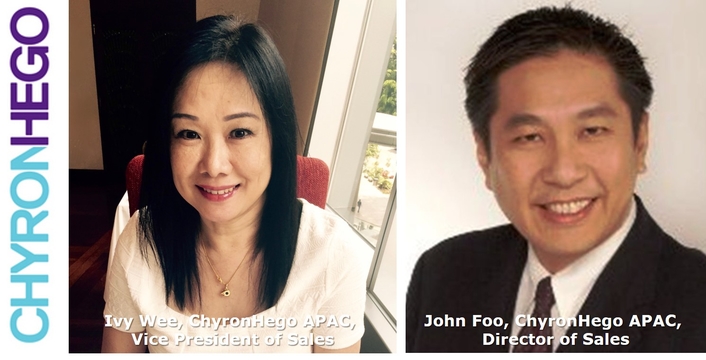 ChyronHego today announced the appointment of Ivy Wee as vice president of sales and John Foo as director of sales for the company's Asia-Pacific operation. Together, Wee and Foo will manage the APAC team and take charge of all ChyronHego's sales, marketing, and business operations initiatives in the region. Both are based in Singapore and report to Paul Weiser, ChyronHego's vice president of sales for the Americas and Asia-Pacific region.

Ivy Wee brings more than 20 years of manager- and director-level sales experience at technology companies to her new role with ChyronHego. Just prior, she served as regional sales director, APAC, for the Vitec Group, preceded by Southeast Asia business manager, digital publishing solutions, for Adobe Singapore. Other prior positions include Asia-Pacific sales director for Avid Technology, and director of sales, Southeast Asia for Quantel Asia-Pacific. Earlier in her career, Wee held director-level positions with Discreet Singapore and Kinetix, both divisions of Autodesk Asia, and also Discreet Logic Asia.

John Foo has more than 25 years of experience in business and sales management for the technology industry. He joins ChyronHego from Ikegami Electronics Asia-Pacific, where he served for five years as strategic business director in charge of enterprise accounts for the company's broadcast cameras, video switchers, monitors, and video microwave systems. Other previous positions include regional sales manager for Grass Valley Singapore, and regional sales manager for Philips Digital Video Systems. John was a former commercial diver in the marine industry with experience in salvage and port operation and oil and gas exploration projects before a career change in 1990.

"Ivy and John are outstanding additions to our APAC team. Both bring deep and broad experience and expertise in sales management for large and complex technology sales operations, with in-depth knowledge of the broadcast market in the Asia-Pacific region," said Weiser. "We look forward to working with Ivy and John to build ChyronHego's brand recognition in APAC, with continued sales momentum and dedication to a superior customer experience."