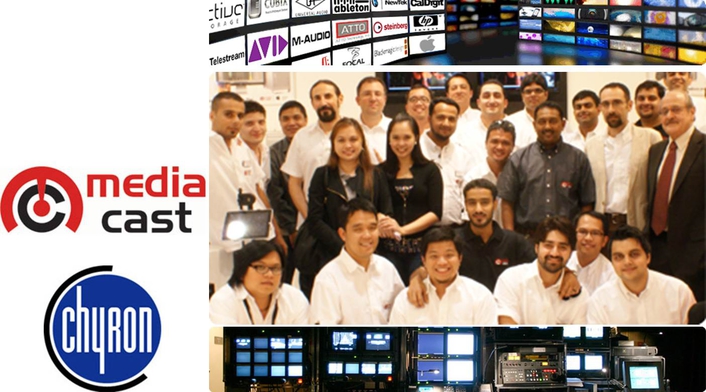 .
Chyron today announced that Dubai-based MediaCast, a premier distributor of professional audio/video solutions ranging from broadcast, live-to–post, and on demand, is the company's newest distributor in the Middle East. Under the partnership agreement, MediaCast is authorized to distribute the new ChyronIP solution — a real-time HD/SD 2D and 3D character and graphics generator that brings Chyron's acclaimed full-motion, data-driven 3D graphics to NewTek TriCaster™ live production systems.

"We are pleased to be partnering with MediaCast to bring this exciting new offering to the Middle Eastern broadcast market for the first time," said Paul Glasgow, vice president of EMEA sales at Chyron. "ChyronIP brings users compelling, high-impact graphics typical of major network broadcasts at an unprecedented price point."

"There is an excellent synergy between Chyron and MediaCast," said Peyman Dadpanah, business director at MediaCast. "We are excited to associate with Chyron to meet the market requirements of a high-quality and cost-effective CG to combine with NewTek TriCaster family of products, which are becoming the choice of many broadcasters in the world. MediaCast will endeavor to observe the highest standards in sales, service, and customer support for Chyron in the Middle East."

ChyronIP is the ideal solution for bringing animated and information-rich graphics into entertainment, news, sports, and any other live production. ChyronIP ships standard with Chyron's award-winning Lyric® PRO software. Delivering key and fill signals via the TriCaster network interface, ChyronIP offers broadcasters two full-HD or -SD, live, full-motion channels of Chyron graphics, which are delivered via a network connection without tying up any of the TriCaster video inputs that are so critical to live production.

MediaCast, the media solution expert, is based in Dubai since 1997 but serving the wider region. MediaCast is the regions premier distributor of professional audio/video solutions ranging from broadcast, live to post or on demand. We have the experience, knowledge and know how to assist you with creating your 21st Century media hub. MediaCast has strong foothold in providing solutions and support for the music & movie production industry in the Middle East. We successfully gathered in our portfolio many of the major brands in the computer based music and movie production and thus become a value-added partner, consultant and vendor for our video & audio-oriented customer.

Chyron (NASDAQ: CHYR) is a leading provider of Graphics as a Service for on-air and digital video applications including newsrooms, studios, sports broadcasting facilities, and corporate video environments. An Emmy® Award-winning company whose products have defined the world of digital and broadcast graphics, Chyron's graphics solutions include the Axis World Graphics online content creation software and order management system, on-air graphics systems, clip servers, channel branding, and graphics asset management solutions, all of which may be incorporated into the company's BlueNet™ end-to-end graphics workflow.