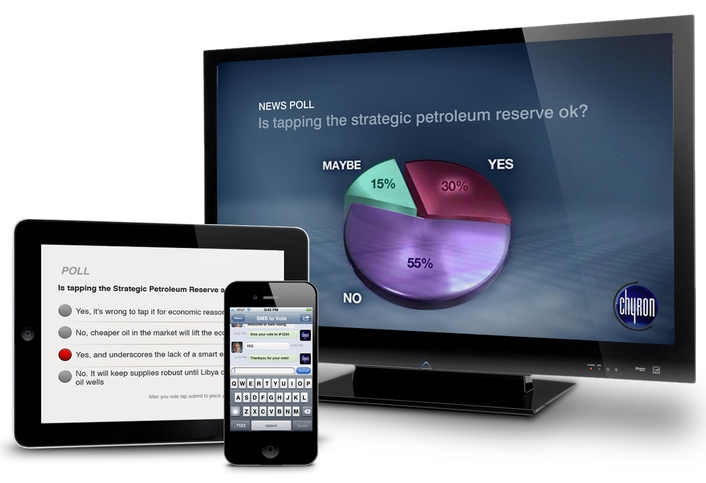 "Our customers are leaders in their markets and are by nature, innovators and early adopters of leading-edge tools," said Michael Wellesley-Wesley, president and CEO at Chyron. "Engage offers easy access to tools from top companies working in second screen environments. By building these technologies into the TV production workflow, Engage gives artists and producers the means to take content such as Twitter feeds, polls, text messages, and other viewer-generated data to air within their live broadcasts."

A flexible and evolving platform for data integration, Engage has the potential and capacity to support an unlimited number and array of social TV and social media technologies. As a result, Chyron customers will be able to switch, mix, and match multiple social, second screen, and other data streams at will.

During the 2012 NAB Show, Chyron (booth SL1510) and its partners will demonstrate how Engage facilitates fast, easy access to and on-air presentation of multiple apps and data services.

About Chyron
Chyron is a leading provider of Graphics as a Service for on-air and digital video applications including newsrooms, studios, sports broadcasting facilities, and corporate video environments. An EmmyÂ® Award-winning company whose products have defined the world of digital and broadcast graphics, Chyron's graphics solutions include the Axis World Graphics online content creation software and order management system, on-air graphics systems, clip servers, channel branding, and graphics asset management solutions, all of which may be incorporated into the company's BlueNet™ end-to-end graphics workflow.