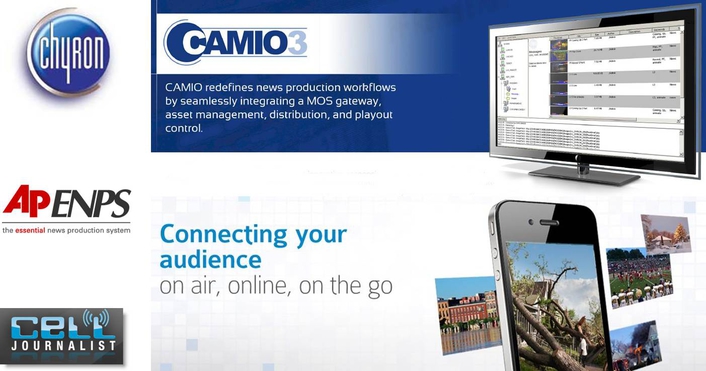 New Partnership Uses Open Standard MOS Redirection to Move Assets Across Platforms
Chyron announced that it has integrated the company's CAMIO graphics asset management server with the Web-based Cell Journalist application to streamline the incorporation of user-generated video content into a news rundown.

This integration enables producers to locate Cell Journalist content through the Associated Press ENPS interface and quickly move it to the CAMIO server for playout to air. With this capability, broadcasters can maximize the value of user-generated content — such as media captured and uploaded by a field journalist or just a person off the street — which proves particularly useful during live breaking news and severe weather coverage.

"In the past, an integration of this sophistication would have been costly both in terms of development time and money," said Jim Martinolich, vice president of integration technology at Chyron. "Now, however, we have been able to leverage MOS Redirection, part of the open-standard MOS communications protocol, to simplify the sharing of content among systems. In doing so, we make it easy for producers to access unique or timely user-generated content through the same ENPS interface they use to create their news stories. This is a simple solution with a huge benefit — namely, a more relevant and visually rich news product, without added workflow complexity."

Cell Journalist is a comprehensive platform that allows users of mobile devices to upload, view, and share images and videos with a news station in seconds. Through the integration of Chyron's CAMIO and Cell Journalist, a producer working in ENPS can locate uploaded stills and video hosted by Cell Journalist and then simply drag and drop them into a Chyron template and into the newsroom rundown.

"Chyron and AP ENPS share our vision of breaking down silos and making content available to the entire newsroom. This integration will help stations win the big story by providing real time access to content submitted by audience and staff alike," said Parker Polidor, president of Cell Journalist.

"This is an excellent example of how MOS and Open Standards can be used to build a completely transparent bridge from a cloud media source to a local production channel," said Mike Palmer, director of design and integration strategy for AP ENPS. "Chyron and Cell Journalist have remarkably simplified the journalist's job by hiding the complex operations normally required to manually download, transcode, and copy media from one source to another. This ultimately makes the journalist significantly faster, more competitive, and more efficient."

About Cell Journalist
Cell Journalist LLC is based in Nashville, Tenn. The company's Cell Journalist application is the leading application of its kind for media outlets seeking images and videos of breaking news, weather, and community events. Clients include Cox, Scripps, Raycom, Belo, Barrington, ABC, and Fox.

About AP ENPS
ENPS is the world's most advanced, reliable, and widely-used news production system. It is used by more than 60,000 reporters, writers, editors, and producers in 800 newsrooms in 60 countries.