THE CHOIR to Stream Concert Live 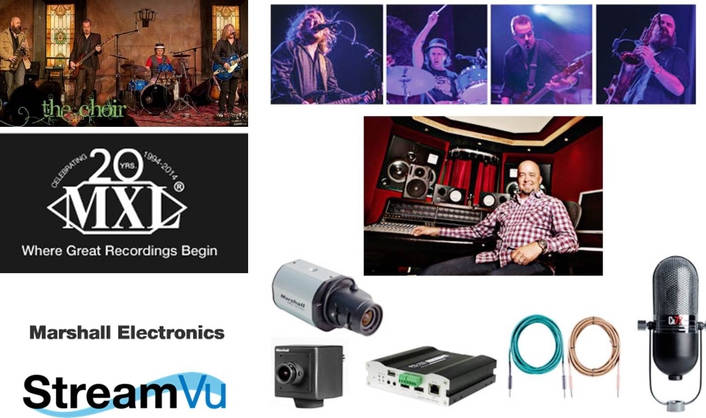 Nashville-based Band THE CHOIR and Recording Engineer Russ Long Partner With MXL Microphones, Marshall Electronics, and StreamVu
MXL Microphones, Marshall Electronics, and StreamVu have partnered with THE CHOIR, a Grammy nominated band based in Nashville, and Russ Long, one of the music industry’s most respected recording engineers, to stream live while the band records its upcoming live album. For the first time, fans will have a real time, behind-the-scenes glimpse of the creative process as THE CHOIR lays down tracks in front of a live audience.

MXL Microphones, Marshall Electronics, and StreamVu have partnered with THE CHOIR, a Grammy nominated band based in Nashville, and Russ Long, one of the music industry’s most respected recording engineers, to stream live while the band records its upcoming live album. For the first time, fans will have a real time, behind-the-scenes glimpse of the creative process as THE CHOIR lays down tracks in front of a live audience.

The band will play two hometown shows that will be streamed live from a studio in Nashville to www.TheChoir.net, where viewers all over the world can watch the band perform. Marshall, MXL, and StreamVu are providing the hardware and technical support to stream the shows. Russ Long will record the performances for the CD to be released later this year.

The project is made possible by Marshall Electronics’ IPTV solution, which includes Marshall HD mini cameras and a video encoder that allows the cameras’ feeds to be viewed online. IPTV enables bands and performers to set up at clubs and venues, and live stream their concerts right onto the home pages of their websites. StreamVu, an IPTV content delivery network, will distribute the concerts from the cloud to internet-enabled devices everywhere.

THE CHOIR will perform with MXL microphones and Sound Runner Cable by MXL. The performances will be viewable on MXLmics.com as well as TheChoir.net.

The band will play songs from their new album, Shadow Weaver, along with fan favorites from their vast catalog, in two shows at Studio Instrument Rentals, Inc. in Nashville, TN. In addition to sound recording by Russ Long, the camera feeds will be recorded for later video editing.

“We appreciate the opportunity to take our hometown gig and offer it across the globe via Marshall’s cool new live streaming technology,” says Dan Michaels, the band’s sax and lyricon player.

“This live album has been in the planning for over six months and we’ve been determined to make it something extraordinary. Adding a live audio and video streaming element does exactly that. Ten years ago I would have never imagined that this would be possible but MXL, Marshall & StreamVu have somehow developed a remarkably high-quality live streaming solution that is amazingly affordable, stated Russ Long. “I’m excited to say that we’ll be incorporating their products throughout all aspects of the shoot including the MXL microphones on the stage and the Mogami cabling integrated into the Pro Tools system.”

“Live streaming is the future of concert distribution,” says MXL Director of Sales and Marketing Perry Goldstein. “Bands can stream their own live content with a small investment in equipment and a CDN. Bands with a large, spread-out fan base, like The Choir, can use live streaming to reach their audience all over the world.”

Brian Arrowood of StreamVu says, "It's not often that you can be part of history, but this is one of those rare moments where something truly historic is taking place. A few years back the idea of streaming a live concert was a major undertaking with a certain amount of risk involved. Now we are not only streaming live but this is a live stream of a concert that will become a live album. Marshall Electronics is the only company I know that can make this happen. With broadcast quality encoders, professional MXL mics and the best (Mogami) cable in the industry, Marshall delivers. The cool thing is that not only does Marshall make this possible, they make it affordable."

Key Points:
·    The Choir’s live performances of Shadow Weaver will be live streamed on July 26 at 6 pm and 8:30 pm Central Time at www.TheChoir.net and www.MXLmics.com.
·    Both performances by THE CHOIR will be streamed live using the affordable and portable Marshall HD mini cameras and video encoder/decoders. The cameras used will be the Marshall CV500-MB2 and CV430-CSB.
·    Six Marshall mini cameras will be positioned throughout the studio, capturing different vantage points throughout the shows. A Marshall technician will operate a video switcher to change the camera views; the switcher then sends the cameras' video signals into Marshall’s PS-102 Producer Station encoder to prepare it for distribution by StreamVu.
·    Both shows are also being recorded by Russ Long for an upcoming live album release by THE CHOIR due out in this fall.

About The Choir
The Choir is a Nashville-based indie rock band that originated in Los Angeles 30 years ago. Since then, the band – still with its original members - has released 15 albums. The latest is entitled Shadow Weaver. The Choir were nominated for a Grammy in 2000 and won the Dove Award in 1996.

About MXL
MXL is a leading manufacturer of consumer and professional audio products for the music recording, broadcast, post, production, and live sound markets.