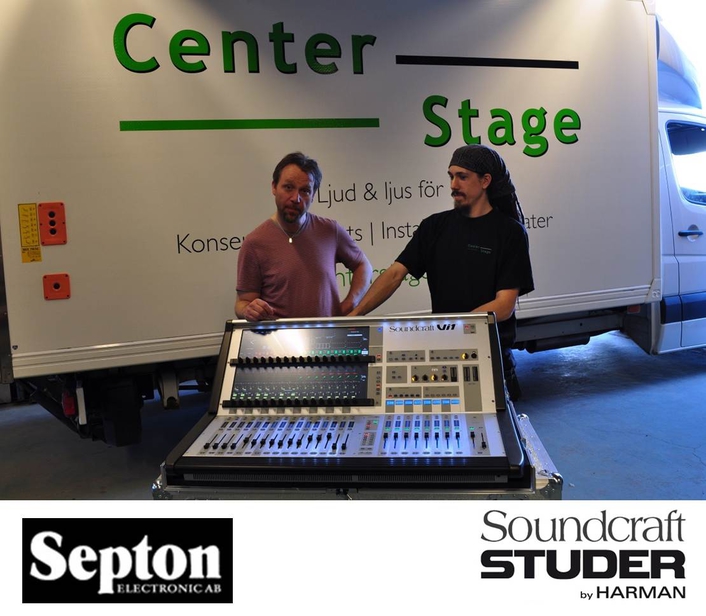 Their growing fleet of industry standard components supports this says Robert Berglund, “We have used Soundcraft analogue consoles in the past, however I first encountered the Vi digital series at House of Dance in Oslo, while on tour with Andersson Dance 2009. The desk certainly made a positive impression with its rather unique control surface, but also sturdy and genuine feel.”

By spring of this year the company was ready to make its investment. “The Vi1 went straight out of the box and onto its first gig,” Berglund says. “All the basics were quick to find and navigate, and the quality and feel of the desk makes the FOH position a nice environment in which to work. In fact we expect all of our staff to be mixing on it by the end of the summer.”

So what had led Center Stage to the Vi1? Since the company has experience working at many different venues they have had plenty of opportunity to test the leading digital contenders—but they also knew they needed a versatile desk, equally accomplished at mixing corporate events and live concerts. “We looked at the mid-range market and there were several excellent options. But it was the service and support we knew we could rely on from Septon that swayed us towards Soundcraft,” Berglund says.

For the time being Center Stage is operating its compact Vi1 in standard configuration, with onboard 32 channels of analogue input to 27 analogue outputs, plus six digital inputs, four stereo FX returns and six digital outputs. But in the future they anticipate upgrading to 64 channels by adding a stagebox and MADI card.

“So far it feels like a very good decision, as on top of everything else, the Vi1 is also a very competent theatre desk,” Berglund concludes.