In a world where the lines between linear TV and the web are increasingly blurred, broadcasters are constantly seeking new ways to attract and retain audiences.

CCTV’s front-running vision for global news production has been to create a collaborative platform that’s accessible by all its journalists and bureaus – allowing staff to freely exchange content and access scheduling and planning functions.

The effective adoption of both private and public cloud is a critical success criteria for CCTV. This utilising an all-software platform that the benefits of both strategies, whilst side-stepping their inherent limitations.

“The globalisation of news requires a global perspective delivered with local understanding” says Liu Wanming, Technical Director of News at CCTV. “Our goal is to give immediate access to content from across all of our regions, from a wide range of creative toolsets, to enable this localisation of stories for the audience and their devices.”

Partnering with developer Sobey for the system at its HQ in Beijing, CCTV has opted for Hive, the unified content platform.

Making use of distributed micro-service technology in the back-end, with operations analysis via customisable dashboards at the front, Hive streamlines and controls today’s news production operations.

Open APIs allow many different creative and authoring tools to be integrated onto the Hive back-end. For the first time journalists from different groups and experiences can access the same content, at the same time using their toolsets to craft their story, tailoring it to their particular audience or device.

The private cloud effectively operates as an on-premise datacentre, storing and managing metadata, proxies and high-resolution footage to facilitate content sharing and new media production. The public cloud contains mirrored copies of all files, synchronised with the private cloud.

Irrespective of where the journalist is based, they can build an Edit Decision List (EDL) and create a complete story package using footage gathered from anywhere around the world. Initial work done in the field using proxies is then published back to the main system and re-linked to centrally-hosted high-res footage.

“Providing the easiest access to content, securely, from literally anywhere, requires a single platform capable of running in private environments and public cloud natively” notes Shi Qiang, CCTV project manager. “Our ability to reduce engineering, integration, training and support cost with this single overall architecture – while ensuring the scalability and flexibility to decide where to place the platforms and which partners to work with – is absolutely critical to the success of this project.” 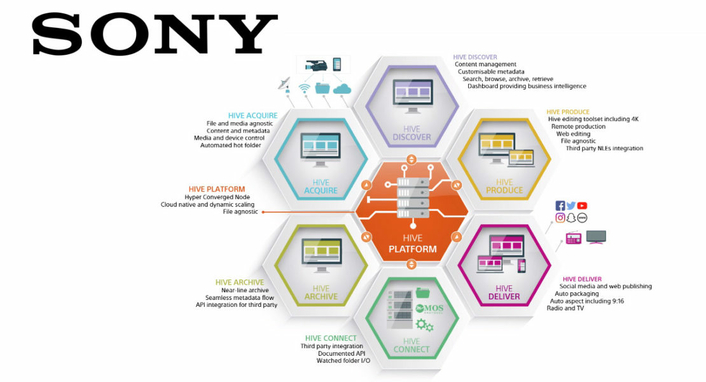 The solution is being implemented in two stages, with first elements due to go live in February 2017.

Phase 1 includes the construction of CCTV’s new headquarters in China, complete with private cloud and public cloud capabilities. This will initially support new media production only with TV news being produced using a legacy system.

Phase 2 will see an enhancement and scaling of the headquarters to support both TV production and new media production simultaneously. Expansion for American and European regions will follow up later in 2017.

Despite differences with the Chinese market, European broadcasters can gain valuable learnings from CCTV’s experience. And now Sony brings exactly the same innovative platform to European customers in the form of Media Backbone Hive.

This journalist-centric network production system is built on a unified content platform and utilises hyper-converged node technology. Uniquely powerful, scalable and flexible, it’s ideal for any broadcaster or other media organisation looking to improve workflow efficiency and attract new audiences.

“The issues being addressed by CCTV are uppermost in the minds of all of our customers; namely collaboration, governance, the ability to tailor the stories to the local audience and get those stories to that audience on their preferred device” states Richard Scott, Head of Sony Media Solutions.

“The commercial reality of multiple teams working on or across different systems and waiting for content to be copied cannot carry on indefinitely. Hive marries the technology of the internet economy, cost effective speed and flexibility, to the quality, governance and collaboration of broadcaster’s systems.”