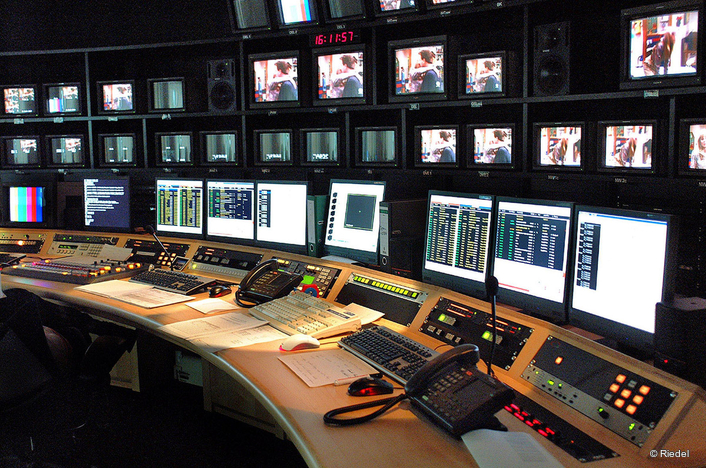 Following the relocation of Mediengruppe RTL Deutschland to the former site of the old convention center in Colcogne, CBC decided to install a Riedel intercom matrix in the new broadcasting facility. Riedel Communications supplied CBC with a total of 5 Artist mainframes and more than 100 control panels.

Two Artist 128 mainframes are used in the two control rooms of the main studio. Additional Artist 128 frames are installed in the master control room and in two other studios. An extra Artist 64 is set up in the broadcasting operation room. More than 100 Artist 1000 and Artist 2100 series control panels are used. 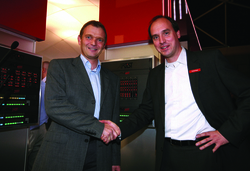 The redundant ring configuration of the Riedel Artist intercom matrix makes it the perfect solution for broadcasting applications. Even in the unlikely event of a connection failure between two devices, the operation of the rest of the system is guaranteed. The full summing architecture allows non-blocking matrix sizes of up to 1,024 x 1,024 ports. The Artist 1000 and Artist 2100 series control panels are designed for complex intercom installations. The Artist 1000 panels each have two auxiliary analog I/Os that can be used for a variety of applications such as the integration of external audio devices or line audio signals. Three GPIOs per panel make relay circuits possible to control call lights or other devices. MADI client cards are used to integrate the Lawo audio router into the system.

“The flexibility of the system and its redundant layout, vital for live-broadcasting, were the reasons we decided to choose a solution from Riedel.“ said Thomas Harscheid, CEO of CBC.

Flexible routing with the Director Software

For the easy configuration of the intercom matrix the configuration software ”Director“ allows programming via drag & drop. The Director plug-in ”Partial Files“ expands the software by adding the possibility to create and save partial configurations of a running system. This feature is invaluable for both large systems or any system where multiple computers are used to simultaneously program the matrix. In addition to the Artist intercom matrix, 35 AIR headsets from Riedel are used. The headsets’ ultra light design makes it possible to wear them comfortably over a long period of time. The new facility will start broadcasting in 2009.

Since its establishment in 1994, CBC has become one of the leading broadcast and production companies in Germany. In Cologne, Munich and Hanover CBC supports the stations VOX, Super RTL, RTL II, RTL SHOP, tv.gusto, tv.gusto Premium, RTL Crime, RTL Living and Passion. In addition, CBC broadcasts the Swiss and Austrian commercial inserts for VOX, Super RTL and RTL II. Furthermore, on behalf of Sportcast GmbH, the company is responsible for the production and broadcast of the foreign language live reports for the 1st and 2nd divisons of the German soccer league. CBC’s postproduction facilities include 60 edit suites, graphics stations, and digital audio suites. CBC is a RTL Group Germany company.