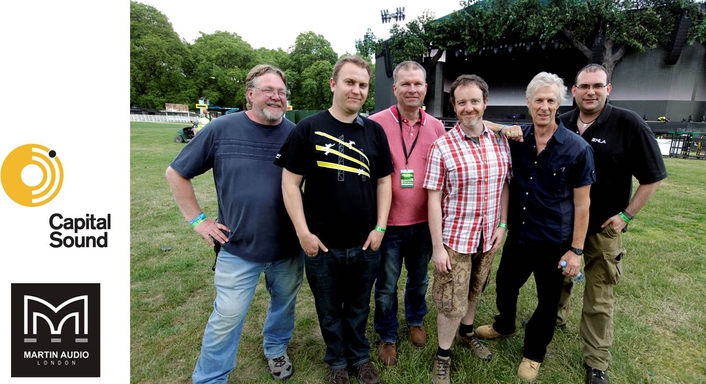 The Killers’ decision to play their largest ever one-off concert at Wembley Stadium using MLA and confirmation from AEG Live that Capital and the award-winning system had also been selected for the Barclaycard British Summer Time Festival at Hyde Park meant that the scheduled delivery of the additional investment in MLA was well timed.

Capital Sound general manager Paul Timmins says that the task of deploying around 150 enclosures from the MLA family to cover the Wembley gig and as many as 180 for Hyde Park was challenging. “The additional purchase of MLA had always been in the planning — it was just a question of timing as to when we took delivery,” he stated. “The confirmation of Hyde Park made that decision for us and we now have sufficient cabinets and infrastructure to be able to field two large systems.”

With James Gebhard piloting the FOH mix on the Killers’ Battle Born tour, the scalable PA rig was extended from a typical 14 elements a side to hangs of 20 x MLA enclosures plus a single MLD Downfill at each side of the stage for the main Wembley PA. This was supported by three delay hangs each containing a further 12 MLA enclosures along with sidefills to provide coverage for a stadium crowd numbering around 78,000 people.

“This was marginally bigger than Mexico City and the largest headline gig outside a festival situation that the band has ever performed,” said Gebhard.

Said Timmins, “Wembley had been our largest deployment of MLA… until Hyde Park came along. Since there was less than a fortnight between the Killers show and Bon Jovi opening the Festival a lot of careful planning was required.”

Once the system was installed and sound measurements taken the production company was able to increase the infield sound levels by as much as 6dB(A) within the concert area while still comfortably maintaining the offsite sound below the 75dB(A) level stipulated thanks to the cellular controllability of the groundbreaking PA system.

Reviewed on an aggregated basis, the consecutive deployment of around 330 MLA elements for these two events was easily Martin Audio’s largest ever seen in the capital.

The purchase is already proving its worth, according to Timmins. “During the Killers’ tour we have been able to prove the scientific claim that an MLA system is capable of covering a 60,000 stadium comfortably without delays.”

As for James Gebhard, he appreciates the service he receives from a PA company that has been his ‘go to’ service provider since 2001. “Capital knew I had wanted to use MLA for this tour and that I wanted the best provider of that system. And so they took the decision to buy MLA — which was a huge financial commitment on their part. At Wembley the guys again did a fantastic job — and I couldn’t have asked for better crew.”

And Martin Audio managing director, Anthony Taylor, added, “It has been an amazing few weeks for the company and we are indebted to Capital Sound for their support and inspired way in which they have packaged and optimised our systems in the face of these extreme challenges. We are thrilled both to have supported the Killers’ largest ever gig with our MLA technology and then to overcome the challenging sound issues at Hyde Park concerts, with opening concerts by Bon Jovi and The Rolling Stones.”