Camp Digital Is On the Move With Soundcraft Vi4 Console 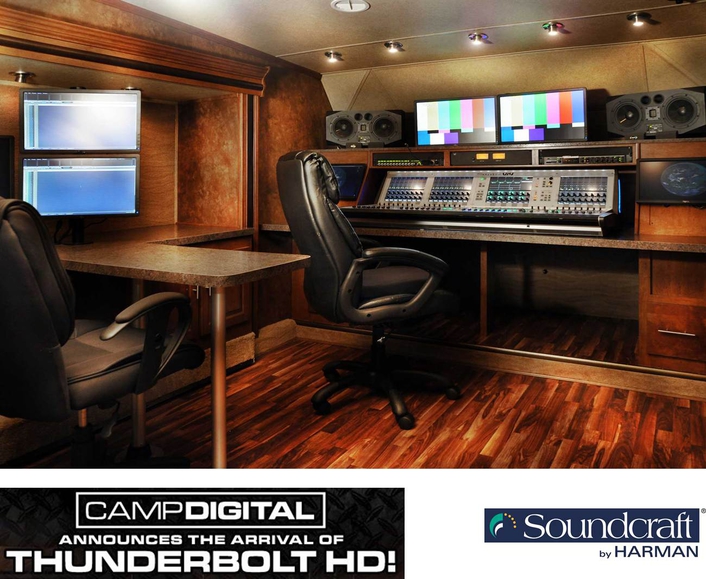 Camp Digital specializes in music and entertainment events for television, home video and non-traditional media including the Internet, tablets and wireless devices. The company’s five partners have more than 100 years of combined experience in TV and video production.

“Our concept with the Thunderbolt HD truck, as has been the company’s philosophy all along, is to be able to get in and out of spaces that a tractor trailer can’t, provide the highest HD production quality and still be budget conscious,” said Tom Gregory, vice president of Camp Digital. “This gives us the ability to do jobs that other production trucks can’t touch. Add to that the fact that we’re extremely sensitive to today’s production budgets, we think we’re a great solution for a broad range of clients and productions.”

It’s a philosophy that’s working. Since turning out the Thunderbolt HD truck in January, Camp Digital has produced several “RAM Country” live music events for Yahoo! Music. Thunderbolt was in Indianapolis during the week of Super Bowl XLVI to produce performances by Pitbull and 50 Cent for “Jimmy Kimmel Live!” and was recently on location for Ron White’s second annual “Comedy Salute to the Troops,” expected to air April 22 on CMT. This is also Camp Digital’s fourth year working with ABC and the CMA Music Festival, capturing performances by Keith Urban and Kix Brooks.

With a schedule like that, there’s no room for equipment that can’t handle the mileage. Because of his positive experience from using the Vi4 in the JOURNEY HD truck, Camp Digital added the console to Thunderbolt HD’s system. “When we first purchased the Vi4, we needed a console that had a conservative physical footprint but still had the ability to handle well over 48 inputs and did not compromise on quality or flexibility,” Gregory noted. “The Vi4 has all the features we need.”

“The Vi4 has been absolutely bulletproof,” Gregory added. “We’ve had zero issues with it on any level. For the Thunderbolt HD truck, we’re connected with fiber optic cable to the stage box, which gives us more distance to work with, and everything run perfectly.”

Camp Digital’s clients also like the Vi4’s ergonomics. “Jimmy Kimmel’s crew flew out from LA to do the Super Bowl tapings and they had to use our Vi4,” he said.” They were not familiar with the Vi4 in particular, but had worked with Studer consoles in the past. In no time at all they were comfortable with the Vi4 because of its similarity to other Soundcraft and Studer models. They’re all quite logical and straightforward to use.”

“I know Soundcraft specifically designed the Vi4 to deliver flexibility and performance in a compact size,” Gregory stated. “They succeeded. The Vi4 is tailor-made for situations like ours.”

Camp Digital captures and produces music and entertainment events all across North America for a variety of television network and music industry clients.  Camp Digital is a full-service production company that also owns/operates Thunderbolt HD, a state of the art 12 camera video production truck with 64 tracks of Pro Tools audio recording capability managed through the Soundcraft Vi4 audio console.