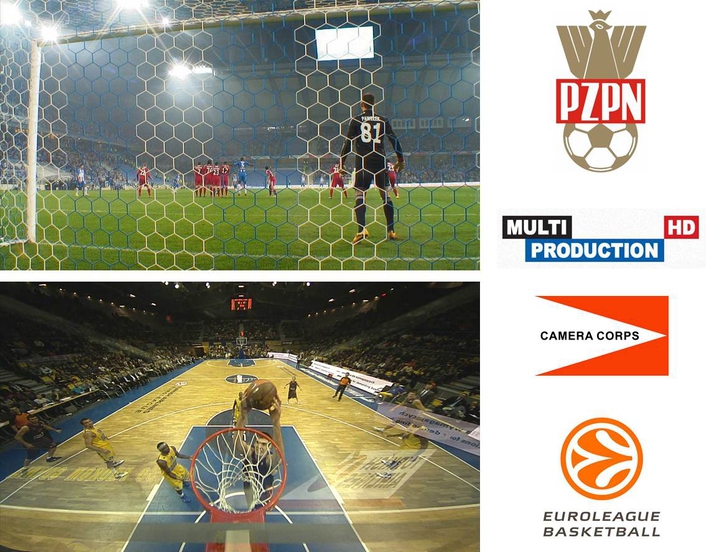 "The Q-Balls are fantastic," comments Multiproduction's senior OB engineer Krzysztof Bronowski. "We first saw them in use during this year's World Cup and made a day-trip to Camera Corps' UK headquarters where we were able to try out the entire system. They are very compact and very robustly constructed as well as being fully weatherproof. For the Legia Warszawa versus Lech Poznan game, we positioned one Q-Ball behind each goal to provide wide-angle as well as close-up shots of approaching action. Each of these was supplemented by a Camera Corps Goal-Cam providing a diagonal view of the entire goal mouth from an upper corner of the net. The third Q-Ball was mounted in the commentator booth. All five cameras work perfectly, giving very good quality pictures of the action both in daylight and artificial light. Pan, tilt and zoom are all smooth enough to be usable on air. Since the first shoot in September, this system has been used at additional football events and during a Euroleague basketball match on 27 October."

A full dual-mode robotic colour camera, Q-Ball is housed in a highly robust 115 mm diameter sphere machined from solid aluminium. Pan and tilt can be operated at any speed from 4 seconds to 20 minutes per revolution through an unlimited number of turns. Integral high-precision low-noise digital motors allow the camera to be repositioned smoothly during live shooting rather than merely between shots. Designed to allow rapid exterior or interior rigging and de-rigging, the Q-Ball weighs 1.3 kg including mounting shaft and can be operated at any angle. The integral camera incorporates a 1/3 inch 2 megapixel 16:9 CMOS sensor delivering 1080i/720p HD or 625/525 SD, both at 50 or 59.94 Hz and in 16:9 or 4:3 aspect ratio.

Camera Corps' Goal-Cam is a miniature HD camera with a high-quality ultra-wide-angle lens, designed specifically to capture the entire goal-mouth from the rear corner of the net. Each Goal-Cam captures the entire goal-mouth plus the full length of the goal interior without wide angle distortion or aberration. An integral ultra-compact remote-controlled pan, tilt and roll head which allows the viewing angle to be adjusted in the event of direct collision from a football. Both Goal-Cams are controlled remotely by an operator using the Camera Corps CCU panel rather than requiring anyone to supervise the camera at each goalside for the entire duration of a match.