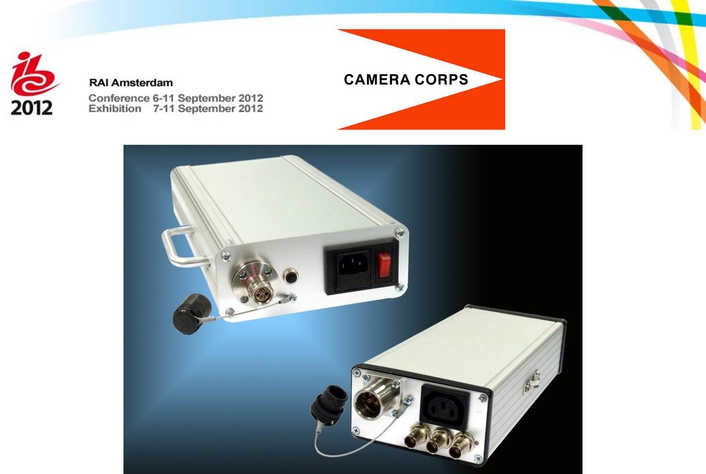 Exhibited in prototype at NAB 2012 and now in production, the link allows any remotely controlled camera system in the company's product range to be operated over long distance via SMPTE 3K-standard electrical/optical cable.

"The SIMPLY SMPTE remote link was developed for use at large-scale outside broadcast events requiring long camera-to-base distances," states Camera Corps' Technical Director Jim Daniels. "It allows large remote heads and boxed cameras to be operated over distances of 5 kilometres or more while maintaining the security and reliability of a dedicated link. Because of their relatively low power requirement, our Q-Ball and Q-Ball Pre-Set systems can be operated over even greater distances of more than 8 kilometres. The link's physical footprint is very small relative to other systems of comparable versatility.”

Fifty SIMPLY SMPTE systems were deployed during the recent Euro 2012 tournament in Poland and Ukraine and 68 are being used in London this summer.

Camera Corps' SIMPLY SMPTE remote link consists of a base unit and remote unit. Powered by 110 or 240 volts AC, the 303 x 165 x 65 millimetre 3.63 kilogramme base unit has an optical input for incoming video data. Electrical inputs allow direct connection of analog genlock video and audio-frequency control data. A loop-through connector is provided for the control data channel. Incoming video from the remote camera is accessible via two HD-SDI outputs.

The remote unit measures 226 x 106 x 56 millimetres and weighs 1 kilogramme. It accepts HD-SDI from the camera and provides genlock, audio data and AC power plus dual 12 volt DC 60 watt outputs on XLR4 sockets for auxiliary equipment. The link can also convey 240 volts to maintain power headroom. Power from the base unit to the remote unit is fully isolated and protected against an open circuit or incompatible equipment.

Exhibiting on stand 10.C49 at IBC2012, Camera Corps will demonstrate SIMPLY SMPTE as part of a complete system including the established Q-Ball and the new Q-Ball Pre-Set compact remote pan/tilt/zoom/focus cameras. Camera Corps' CC-3D Universal RCP allows six cameras of different makes and models and to be comprehensively remote controlled from a single panel. For 3D applications, up to two stereoscopic rigs can be controlled on a paired-camera basis to maintain predetermined adjustment offsets between left and right cameras (or as individual cameras if preferred). The panel is intuitive to operate, allowing fast and easy operation during outside broadcasts as well as for live stage or studio events.

About Camera Corps
Based on the site of the former Brooklands motor-racing track near London’s Heathrow airport, Camera Corps (part of Vitec Videocom, a Vitec Group company) specialises in providing high-volume support services for reality television programmes as well as very large-scale sports and stage events. The company has achieved a pre-eminent reputation for its ability to acquire exciting and unusual television content from exceptionally challenging environments.