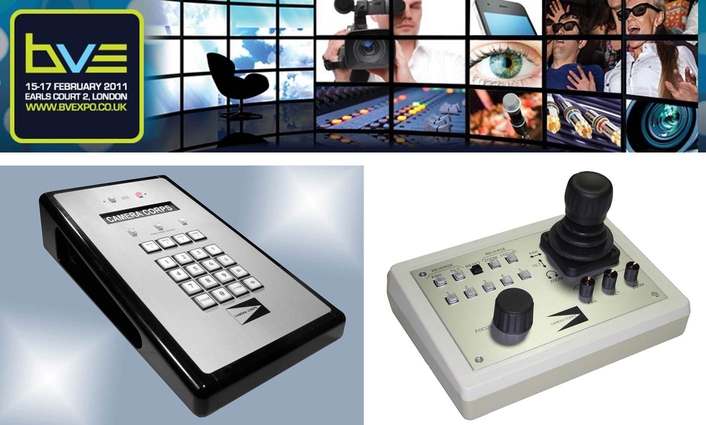 Switchpad is a multi-camera control unit which increases from five to 96 the number of remote camera heads that can be operated via the company's Joystick Control or CCU Panel. It can also be used with Camera Corp's Multi Camera Combiner unit to allow up to four Joystick operators and up to four CCU engineers to control the 96 cameras and pan & tilt heads simultaneously using just a single data line. An output is provided to drive many different types of video router, enabling the picture monitor to follow camera selection at any of the eight operator positions. Up to 255 channel numbers and routing-matrix assignment numbers can be selected via the keypad for easy integration of the 96 camera sources with existing camera channel configurations on video matrices with up to 256 inputs.

Switchpad uses a basic three-digit entry system. This can be shortened by ending the entry sequence with the ENTER button. UP and DOWN buttons can be used to step up and down through the channel numbers. LEFT and RIGHT buttons will step through a sequence of the most recent eight channels used. Four MIX buttons on the keypad can be preset to any four channel numbers as a means of quickly displaying up to four 'stream' or 'mixer' outputs. Up to eight channel numbers can be pre-assigned to the Joystick panel's own selector buttons.

Switchpad is compatible with cameras of many different types and particularly ideal for operation with the Q-Ball ultra-compact robotic system. Connection is quick and easy via a highly robust interface which encodes control data onto a standard audio line at user-selectable bit-rates.

Developed for applications such as commentator-camera control or for outside-broadcast vehicles where desk space is often very restricted, the ultra-compact Mini Joystick Control is compatible with all Camera Corps and Egripment pan and tilt heads, including the award-winning Camera Corps Q-Ball. It is extremely easy to use and ideal for fast-response on-air operation. The joystick and control buttons have the same tactile responsiveness as those on Camera Corps' full-size controller, including fully adjustable pan, tilt and zoom speeds and reverses. Zoom is controlled by rotary twist of the joystick. Up to five separate heads can be operated from a single panel. Reverse settings and control speeds for each of the five channels can be stored in non-volatile internal memory."

Camera Corps's generic audio data communication system is employed to allow unlimited operating distances between Mini Joystick Control and the remote heads. Each of the five channels has its own red and green cue/tally light switch. Individual channels can be locked to prevent inadvertent alteration of presets. Focus can be remote-adjusted manually or switched between manual and automatic when used with cameras that support these features. Mini Joystick Control operates from 9 to 18 V DC power adapter or battery. Total panel dimensions are 190 x 140 x 110 mm. Weight is 400 g.

Camera Corps is the world's leading provider of speciality remote cameras, remote tracking system, camera support systems and full-service facilities for broadcast coverage of international and regional events. The company has achieved a pre-eminent reputation for its ability to acquire exciting and unusual television content from exceptionally challenging environments. The Camera Corps team expands during large-scale events from 11 staff based at Shepperton Studios to as many as 200 specialists, including highly-skilled rock climbers able to establish camera positions in almost any location.