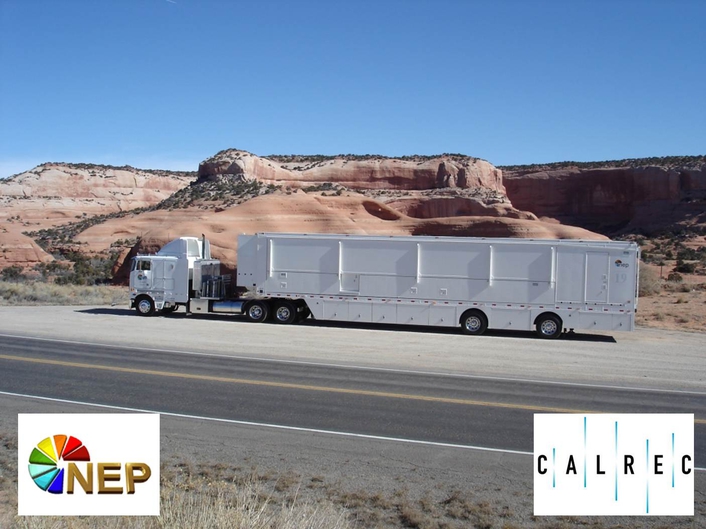 Standalone Truck Designed for Top Entertainment Shows Where OB Parking is Limited
Calrec Audio today announced that its dual-fader console has been deployed in NEP’s new Denali California truck. With 1080p capability and state-of-the-art layout and design, Denali California supports more than 20 cameras and 20 servers. Carrying a 72 dual-fader Calrec Apollo in its audio room, the standalone truck was designed for top-flight live entertainment shows where outside broadcast facility space is limited, like the Super Bowl, the Tony Awards®, and the Kennedy Center Honors Gala.

“There’s not a lot of parking at the Kennedy Center or at Radio City in Manhattan,” said George Hoover, NEP Broadcasting’s chief technology officer. “So the audio is handled out of one audio room with a single mixer doing both the podium portion of the awards show as well as all the music. The mixer may have dozens of wireless microphones on the talent plus playback elements and the orchestra. To get the job done, he needs a powerful desk with multiple layers and multiple faders on the main control surface — and that describes the Calrec Apollo.”

NEP is virtually an all-Calrec house. The company considers other manufacturers when it buys new audio consoles, but consistently chooses Calrec. Key selling points for the Apollo were its distinctive dual-fader technology, which simplifies a big show for a mixer by giving him or her fast access to the maximum number of controls. More pluses were reasonable weight; integrated Hydra2 networking, which unifies I/O whether it’s inside or outside the truck; reliability; sound quality, and client-attracting state-of-the-art technology.

“With its exclusive focus on entertainment events, NEP Denali has earned an outstanding reputation as well as standing invitations to provide HD and digital facilities for major award shows and other live broadcasts,” said Jim Wilmer, Calrec director of sales for the Americas. “Calrec’s rugged, compact, and powerful digital audio consoles are a key component of the outstanding production quality for which NEP is known.”