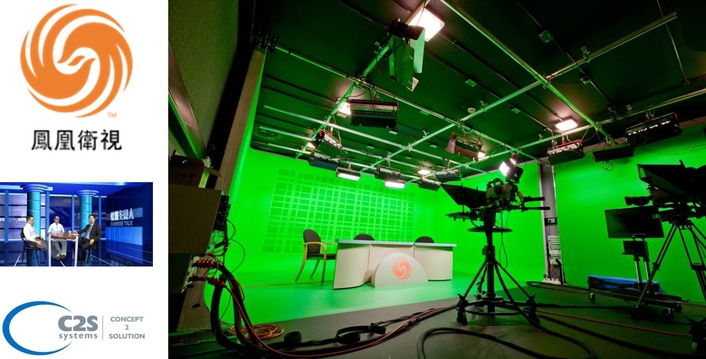 C2S Systems completes turnkey integration project for Phoenix Chinese News and Entertainment
C2S Systems, the broadcast integration arm of WTS Group, has completed work on a new London-based playout centre and studios for broadcaster Phoenix ChineseNews and Entertainment (PCNE). The Mandarin and Cantonese language channels commenced transmission from the new facilities to audiences in the UK and Europe on the 2nd of July.

Integration for the turnkey project was entirely managed and delivered by C2S Systems. The project included a four-camera news and magazine studio with virtual 3D set, a chroma studio with robotic camera, a playout system with capacity for six channels and a plus-one redundancy path, as well as management and set-up of satellite incoming distribution feeds for re-broadcast. C2S Systems’ custom-made furniture was also supplied for both on-set news desks and off-set operation desks in technical areas.

The playout centre, which uses the fully integrated system from Playbox, provides a file-based solution for transmission, ingest, asset management, traffic andscheduling, plus online storage. Post production is handled by three Final Cut Pro edits, integrated to the MAM system for ease of use, and a dedicated voice-over with a fourth FCP suite.

Routing and timing from Evertz was used throughout the facility, with multi-viewers, signal conversion and distribution from Miranda. The picture monitoring came from JVC, with Tektronix in place for test and measurement. The facilities were designed around an office conversion in Richmond, London. C2S Systems worked closely with interiors company TDA who planned the space.

“This project is a great example of what is different about the service we provide at C2S; we deliver value to our customers by being able to offer every single service and function of the build. Having a fabrication team in-house meansthat we can offer custom-made furniture designed to fit both the space and the system, while our tried and tested methods of prefabrication means that we can pass on cost-savings by reducing build times and labour requirements. The chance to provide Phoenix with all of our services has been a great opportunity to showcase our resources”, said Jonathan Lyth, Head of Projects at C2S Systems.

Dr Wenguang Shao, Managing Director of Phoenix CNE commented: “The London operation is a vital part of our vision for growth at Phoenix CNE TV. Our audience in the UK and Europe wantentertainment, news and advertising that is culturally relevant to them – we wanted the studios and playout centre in Richmond to be state-of–the-art in order to grow both our offering and our brand in the region. C2S Systems has deployed facilities that perfectly match our requirements. They were able to provide solutions for every stage of the project, from furnishings to satellite feeds and training of operational staff. They’ve built a technically advanced facility that will become our European flagship.”