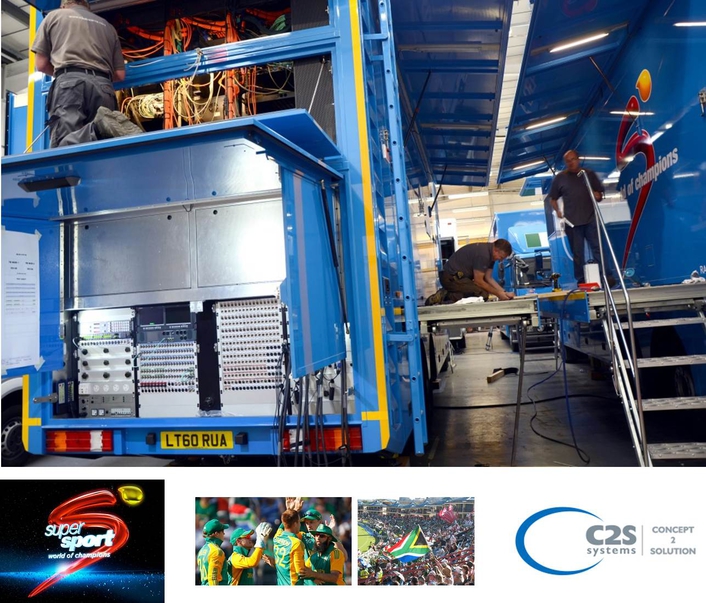 Systems Integrator C2S delivers enhanced OB system to South African Sports Broadcaster
C2S Systems, the systems integration arm of WTS based in Leeds, has completed the second of two HD Outside Broadcast units for South African broadcaster SuperSport, due to beshipped at the end of this month. The two-part project was commissioned in October 2010 following completion of a three-studio complex by C2S Systems for SuperSport and their sister company, M-Net, in Nigeria. Thefirst half of the project, OB1, was delivered in April this year.

The two OB’s were ordered as part of SuperSport’s expansion and upgrade plan, to provide enhanced coverage of the Nigerian football and basket ball leagues in HD, freeing the current fleet for coverage of other sports and events. Both of the new OBs will also be used as general production units for M-Net.

Because of difficult African road conditions, the OB requirement of the broadcaster was fairly unusual. Instead of a single-truck solution using articulated trailer-lorries, common for OB in Europe and the US, C2S Systems provided SuperSport with two smaller and more mobile rigid chassis trucks, designed to join together once on location to make a single OB.

Four Mercedes Axor-R 2529’s were selected as the truck model for the OB units with two further vehicles being provided for support. Each operational pair providesenough space for production, audio and replay areas in one truck and an engineering and uplink area in the other. The production area was designed to include capacity for six VT’s and three on-air graphics systems, while the engineering truck includes capacity for five EVS media servers for slow-motion replay and highlights editing.

Each equipped with twenty HD system cameras, including one super slow motion, plus two HD box cameras on robotic heads, the units provide all the functionality of a single truck with the advantage of additional operator space and an on-board uplink removing the need for a satellite van. Dolby D and E encoding enables 5.1 audio capabilities. The two complete OBs were designed to be almost identical with only the choice of audio mixer differing between them.

“The real challenge and the unique element of this build was joining the two units to give a seamless overall system,” commented Jonathan Lyth, C2S Systems’ head of projects. “Connecting the two had to be easy and relatively quick for operators on location, so we based the interconnection around 4 duplex fibre cables capable of carrying a total of 96 bi-directional HD-SDI signals and intercom. Audio is carried by eight 64 channel madi streams over copper, which integrated directly into the router. Because the local skill-set is still developing, these units will generally be used by less experienced operators than might be found elsewhere, so we factored this into the overall design, using a customised control solution to help simplify both operational and engineer tasks, while still allowing forupgrade and expansion in the future.”

Andre Venter, Director of SuperSport Media Solutions Africa, commented: “It was a going to be a complex and ambitious integration project from the outset, so having previously worked with C2S Systems on our studios in Nigeria; we knew they had the right team to design and build the units to the standard we were after. They already had experience in the region and a strong relationship with our team; we were impressed by their commitment to understanding the intricacy of our operations, designing a solution to perfectly suit our needs. We needed mobility and scalability as well as space, so there were a lot of problems to solve. Our mission is to provide viewers with thehighest quality picture & audio possible, with these new OB units, C2S Systems are helping us to deliver this promise to our audience.”

About WTS Group
The WTS Group stand as leaders in the film & television technology industry, providing solutions and services that enable the acquisition, manipulation and delivery of all forms of media content. WTS brings together the people, products, skills and technologies to bridge the gap between traditional broadcast and a new digital world, setting the standard in the design of bespoke solutions for modern industry challenges.