Joker provides a full range of high end staging solutions including sound, lighting and video equipment as well as stage structures for some of the biggest concerts and festivals in Bulgaria. The company provides sound production for major European music festivals, as well as world renowned artists such as Sting, Metallica, Lenny Kravitz, Bryan Adams and Jennifer Lopez.

“The market in Eastern Europe is very dynamic and growing fast,” commented Tim McCall, L-Acoustics Sales Manager.  “Joker is a known and respected sound provider and is already putting its  L-ACOUSTICS systems to good use for high-profile events across Bulgaria.”

Ivan Gradinarov, co-owner and CEO of Joker Media Rental, enthused: “We are absolutely thrilled to be part of the L-ACOUSTICS rental family. Their systems are rider-friendly because of their power, flexibility and rapid rigging. Being able to offer L-ACOUSTICS is a real asset to Joker and to our clients.”

Joker has taken on an inventory of 24 K2 with 18 KARA as well as eight SB18 and 16 SB28 subwoofers, complemented by six LA-RAK modular touring racks. “Forte Music invited us to a K2 demo at L-ACOUSTICS headquarters, and were very impressed with the sound clarity of the K2 enclosure as well as its rigging system, which is simple, quick and safe,” Gradinarov comments. Joker intends to strengthen its relationship in the near future by extending its K2 fleet while also adding coaxial 12XTs, 115XT HiQ active stage monitors as well as the latest LA4X power amplifiers.

Joker didn’t waste any time in deploying their new L-ACOUSTICS gear on top tier events. In August, the award winning K2 was put to the test in front of 30,000 people for Andrea Boccelli’s sold out concert in the Balgarska Armia stadium in Sofia, the biggest classic concert ever performed in a stadium in Bulgaria. A staggering 160 L-ACOUSTICS speakers were rigged by Joker for this show, including K1 provided by L-ACOUSTICS’ Czech rental partner, T Servis. 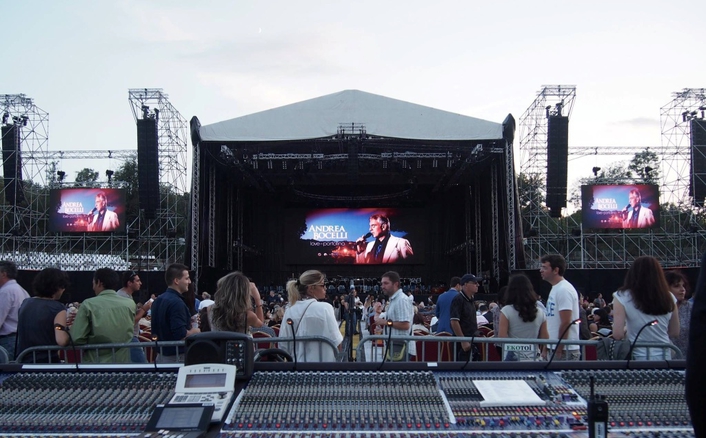 Meanwhile, the KARA system embarked on a 28-show for the Coca Cola Happy Energy Tour with Bulgarian artists, headlined by rock band Funky Miracle. Thanks to its compact size and extremely fast set up, KARA dealt perfectly with the short set up times imposed on this tour, with back-to-back performances.

For the last Happy Energy Tour concert in Sofia, where British X Factor artist James Arthur performed in front of a crowd of 20,000, K2 was deployed by Joker as the main PA system while KARA was used for infill.

“Being a part of the L-ACOUSTICS Rental Partner Network allows us to expand our horizons to markets beyond Bulgaria, while also giving us the opportunity to call on other partners in the network so that we can increase our inventory for special events like we did with Andrea Boccelli,” concludes Gradinarov.  “We are excited to be able to provide high end sonic solutions to the Bulgarian market with L-ACOUSTICS.”