BR's new HD OBVan passes its debut on the Nockherberg 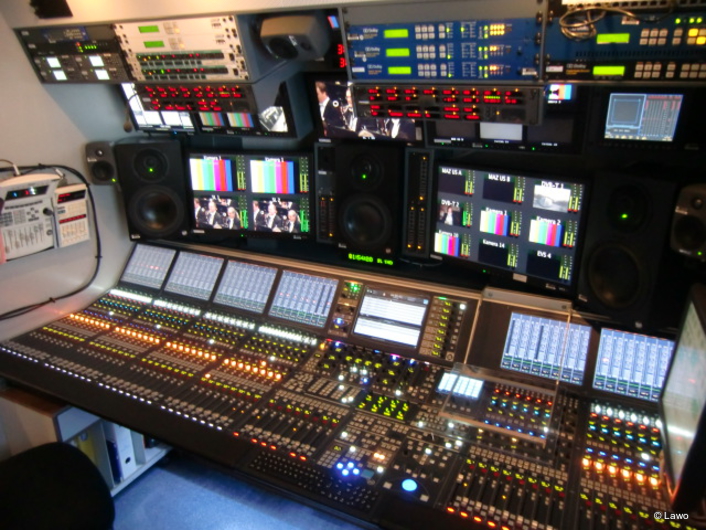 Audio Control Room with mc²66 mixing console
Smile, lift the beer glass, grin and bear the coarse joke during the Bavarian “Derbleck’n”, the traditional humorous “politicians scolding” speech. As so often before, Brother Barnabas has raised a painful subject, and one of the senior politicians has got his come-uppance. Musical comedy ensues, and all buttons are pushed so that the many merry viewers can enjoy the live transmission by the Bavarian public broadcaster Bayerischer Rundfunk (BR) from the Nockherberg in Munich – one of BR’s shows with the highest viewing figures.

There are, however, some changes in this year’s traditional event. A new OB van broadcasts the “tapping of the stout” on the Nockherberg: the FÜ1 HD. During the debut, the OB van transmitted in SD, but the recordings were completed in HD. In mid-March, during the women’s world cup skiing finals in Garmisch-Partenkirchen, BR finally got to broadcast the thrilling duels to complement ZDF’s coverage. Even the most impressive HD-images cannot surpass reality without perfect sound; consequently, Lawo was chosen for audio technology in the FÜ1 HD.

A mc²66 serves as the central production console in BR’s new OB van. Designed for two-person operation, it features 56 faders in a 32-8-16 frame as well as 336 DSP channels. The HD Core, with integrated audio routing matrix, provides three AES cards for BNC and Sub-D and a routing capacity of 8000 x 8000 crosspoints. The FÜ1 HD also offers 12 Lawo DALLIS I/O systems connected redundantly to the HD core. Three are employed as stageboxes allowing connection of up to 80 microphones.

“In order to produce extensive sporting events for DD 5.1 transmission, one needs a large number of input channels as multiple events need to be edited at the same time. For instance, an interview may be recorded while transmitting from the fast lane and, simultaneously, international sound is mixed; all while the broadcast is ongoing. This is one reason why the FÜ1 HD’s mc²66 was pre-configured for two-man operation,“ explained Jürgen Becker, production engineer for audio with BR.

An external bayserver serves to display the mixing console’s GUI on an additional monitor. This monitor can also visualize other applications.

In the editing suite, there is an additional Lawo crystal console with four faders. It is connected to the main console for signal tapping; the control software Virtual Studio Manager (VSM) is used as control system for both consoles.

“The FÜ1 HD, BR’s TV production facility in Unterföhring, is also equipped with a new mc²66, using the same control interface as the one in the OB van. As a result, the training period is minimal and crews from both locations can be assigned to the consoles as they are needed,” noted Matthias Gohla, project engineer with BR. This is one of the many reasons why BR decided upon the Lawo mc²66 as the production console for their new OB van.

Lawo, with headquarters in Rastatt/Germany, specialises in developing, designing and manufacturing mixing consoles and matrix systems for radio and TV broadcasters, as well as for use in live events. High quality and innovative technology are supported by decades of experience in the field of professional audio technology. In 2010, the company celebrates its 40th anniversary.

Lawo’s product range covers digital audio mixing consoles for use in radio, broadcast, production and live applications, including the required software. In addition to the provision of matrix systems and audio networks, Lawo also carries out project engineering tasks and acts as a main contractor for radio OB trucks; these services include user training and maintenance. This high level of expertise results in comprehensive support for Lawo customers.