BroaMan in the Fast Lane for New Grand Prix Season 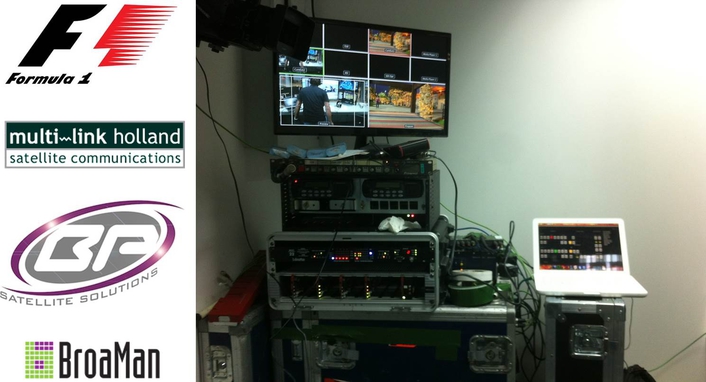 Both companies have a history of collaboration on a number of projects. Multi-Link Holland, founded by Bob Snieder, and BP Satellite Solutions, under Patrick Hendriks, provide satellite uplink and downlink facilities, wireless cameras, multi-camera and edit facilities. They also provide data and DVB-T transmissions — single and multiplexed-channel — for their own respective broadcast clients.

In order to enable fibre distribution over long distances in a more efficient and economical way than previously, for this season they have adopted BroaMan’s new MUX-22 video, audio and intercom module. MUX-22 is part of BroaMan’s scalable and protocol independent environment, which offers up to 16 3G/HD/SD-SDI I/O configurable video ports (with built-in CWDM multiplexer).

Explained Multi-Link Holland SNG operator, Marco van Uffelen, “We have worked in the past with different kinds of fibre systems. But the beauty of the MUX-22 devices is that the units will multiplex multiple signals over just one single fibre each.

“It not only allows us to transmit and receive multiple HD SDI signals and data over just one or two fibres but it does so within our budget range. Costs of airfreighting to overseas locations is prohibitively expensive and equipment needs to be as light as possible, unlike the heavy weight of multi-fibre drums. Therefore, the MUX-22 provides us with a total solution.”

Their search for a system to meet their criteria ended once Patrick Hendriks had set up a meeting with BroaMan’s Manager for Applications Engineering, Maciek Janiszewski, at this year’s ISE 2014 expo in Amsterdam. “Patrick was already aware of the company and it’s products but we had no experience of working with it,” states Marco van Uffelen.

This led to a demo rack being shipped for evaluation, and after all tests had been successfully conducted, the order was placed for two MUX-22 devices, one configured 6-in/2-out and the other 2-in/6-out.

“When we arrived onsite we realised we actually needed a 4-in/4-out solution instead,” Van Uffelen continues. “However, the flexibility and internal setup of the MUX-22 made it easy for us to change the input/output configuration of the units.”

The system connects the OB-truck in the TV compound, with its multiple wireless camera hoist, to the commentary booth, which can be up to 1000 metres away, allowing HD-SDI and intercom signals to be both transmitted and received. The switched SDI output from the video mixer is received at the commentary booth where all camera SDI and intercom signals are monitored and the booth-camera signal is sent back to the OB-truck.

In conclusion Marco van Uffelen reports that “the BroaMan system works perfectly”, adding, “It would be great if we had the budget to implement this site-wide to give us extra possibilities to exchange various signals to different locations. The shipping weight is incredibly low when compared with shipping 8- or 12-pair fibre drums of different lengths, using only one signal per fibre.”

The system made its debut at the Bahrain GP (for ORF) and later for TV Globo Brazil. BP-Satellite Solutions are also contracted to RTL-Germany, MTV-3 in Finland, Viasat in Sweden, Denmark and Norway, and ZDF, while Multi-Link Holland services the Host Broadcaster with their transmission of the World Feed and they also  provide the uplink requirements for TV-Globo, ZDF and at non-European races for ORF. Also involved in the process were Dutch data network provider, Com1; all three companies cooperate closely wherever data and satellite uplinks are involved.