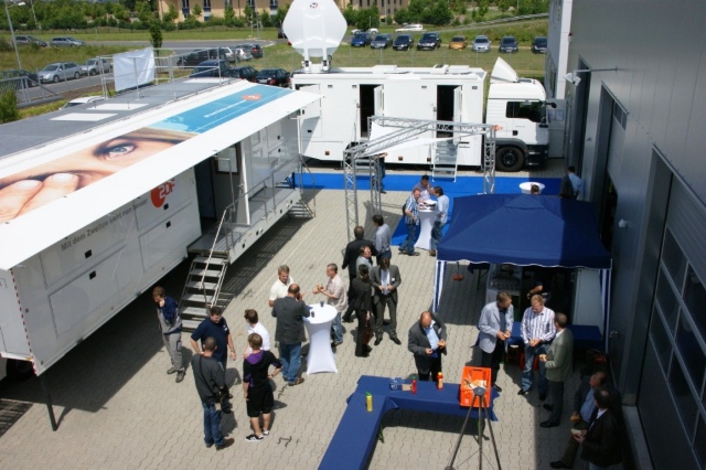 Broadcast Solutions’ Open House 2010
Last Wednesday, Broadcast Solutions welcomed more than 100 guests for an informal networking event as well as the guests could inform themselves of the activities of Broadcast Solutions and the products and services of various Co-Exhibitors.
In a relaxed environment this event presented a chance to have in depth technical and commercial discussions with the exhibitors who displayed various products. Even hands on tests and trials was performed by the exhibitors and the visitors jointly. 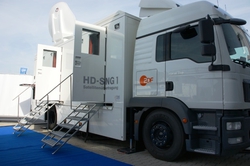 A majority of the guests had a special interest in the 3D-Technology and SatCom Technology. On the outside area, the „MP 5“ and „HD-SNG-1“, which was delivered in April 2010 from Broadcast Solution to ZDF, were presented. The guests showed a special interest in the mobile production unit 5 (MP 5), a 16-Camera HD-OB-Van from ZDF. A trailer with 1,6m expandable side – often referred to as the „Miracle of space“ among OB-trucks, with 28 workplaces and two independent production facilities.

The HD SNG-1 is a 5-Camera fully redundant DSNG-Vehicle from ZDF. An 18t compact vehicle with 2,4m transmit antenna system – The „All round vehicle“ for sport, events, and high profile campaigns in HD with multiple simultaneous transmission paths.

Within the production facility, the ongoing construction of a 16-Camera HD-OB-Van from HD Broadcast GmbH was shown. A 12m trailer with 1,3meter expandable side offering two independent production areas and high end sound-editing, prepared for 3D productions. 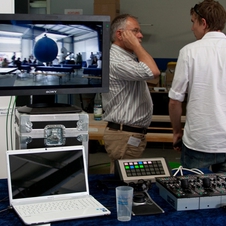 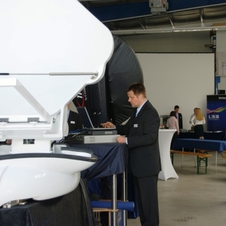 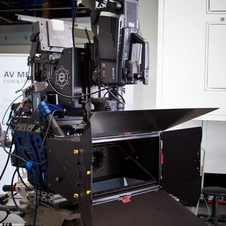 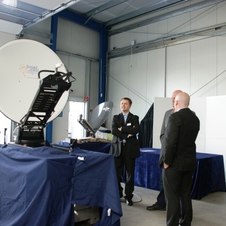 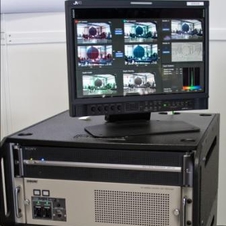 3D Live Production Wireworx showed, together with experts from Sony, Snell, Element Technica, AV-Medien (P+S Technik) as well as the Lens-Manufacturers Canon and Fujinon, the 3D Workflow within live production. ﻿

Throughout the day all visitors had the chance to test the equipment and produce their own 3D content. The following Equipment was presented:
– Remote control of Inter-Okular-Distance and convergence at Element Technica Quasar Rig, which is currently in use at FIFA World Soccer Championship in South Africa.
– P&S Technik Standard Rig from the company AV-Medien GmbH
– Canon with a modified HD-Lens equipped for the 3D-Usage
– Fujninon with a new 3D – Synchro Lenssystem
– The Snell Kahuna Video Mixer during 3D production
– the Sony Processor MPE-200 during usage to control and correct the 3D pictures
– 3D production monitors from Sony and Miracube-Inition Stereobrain Processor for 3D signal processing.

Peter Jakobsson, since May 2010 in Broadcast Solutions GmbH responsible for International Sales & Marketing as well as for building the new ProSat Solutions brand, held a workshop revealing the first details of the new satellite communications products.In cooperation with several international manufacturers a new line of antennas, ranging from 60cm to 1.8m, will be created. The portfolio will cover every need from Drive-Away,s, Fly-Away,s, to Suitcase products and mobile VSAT and even large fixed earth stations.Also a range of antenna controller, HPA controllers, and remote controllers will be included in the new ProSat Solutions product line.﻿

ProSat will operate closely with international partners for existing products, but also simultaneously establish in-house production of several products, this will be acomplished by combining the Broadcast-Solutions expertise with Mr Jakobssons long experience.
A complete product and service offering will be presented at the annual IBC exhibition in Amsterdam September 10-14.The second part of the workshop was covered by Mr, Lutz Bartz from Ericsson, who presented the new modular encoder / modulator products from Ericsson.

During the workshop „the network based ob-van“ the network and control system of a modern ob-van was introduced to the participations by Humphrey Hoch (LSB) and Thomas Schloegl (Broadcast Solutions GmbH).﻿

During the first part of the workshop, the advantages, like central control and administration, simple future proof expansion, high level of failure safety, but also the advanced possibilities of the network based ob-van were explained. Several potential problems, their cause and their solutions were shown and some network basics like VLANs, routing, broadcast and multicast were explained.
During the second part of the workshop the control system VSM (Virtual Studio Manager), which is network based, was presented. The advantages of the central control of connected devices in the network and the simple configuration, expandability, and smooth monitoring of the system impressed many of the participants. During the presentation, the hardware and software of the VSM was shown as well as the possibility to connect multiple ob-vans in order to enable full control of all components of all connected ob-vans. Furthermore, the recently implemented alarm management, which allows easy monitoring of all SNMP-capable devices on the network, was presented.

The workshop was well received by the participants and created a real interest for the presented technology and software.