Broadcast RF to show the latest specialist RF camera systems for OB and sports broadcast and new wireless Ref-cam with Backpack
Broadcast RF, specialist provider of wireless camera equipment to the TV industry, will be showing their very latest RF systems for Outside Broadcast, featuring an entirely new Refcam system, which captures High Definition video yet is small enough to be head mounted.

While linesmen and referees accepted Broadcast RF’s first Refcam, and Sky Sports used it to great advantage in their sports coverage, the new system has improvements all round. It features a tiny new camera with an HD-SDI output which feeds directly to a transmitter, making the whole system smaller and lighter and nicer to wear, besides using less power. Broadcast RF supplies this with full remote camera control so that OB vision engineers can control the picture, exposure and colour matching from the van. The transmitter is a Cobham NANO HD which will operate throughout an entire match on one battery. The whole system is worn in a pack under the referee’s match day shirt, and will be ready and on display at IBC. 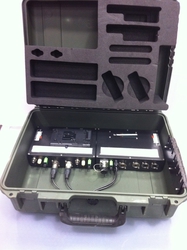 Broadcast RF will also show their own new RF Fibre Extension System – a product which the company created because they could not find a commercial product that exactly fitted their requirements. It is used to transport the received RF signals distances of 500 metres or more, in those situations where the receiver cannot be located by the OB truck. Consisting of just a 19” rack base unit and a waterproof fibre remote adaptor box, there is not much to rig at the venue, and the system is powered by SMPTE fibre. It was used with great success for the radio cameras and the helicopter cameras at the FIFA World Cup, the roving cameras at Wimbledon and touchline cameras at the weekly Rugby League games.

Also on show will be a brand new compact wireless camera system using the Sony PMW 500 camcorder which is indispensable for its compactness and light weight. It features a new mounting bracket which carries a compact 1 watt power amp, the camera control receiver and the antennas, and is based upon the latest, smallest, Vislink L1700 transmitter. The camera control uses a compact data receiver to communicate with a large range of Sony cameras without an external interface. 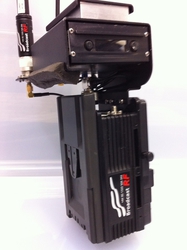 At only 1.7 kg, the sytem was deployed at Hoylake for the BBC for the Open Golf Tournament and received nothing but praise from the camera operators who had to carry them for twelve hours every day. It achieved 100% RF coverage of the course, leading the CTV OB Unit Manager to describe it as: “the best RF camera operation I have ever experienced at an Open Golf.”

About Broadcast RF
Broadcast RF has one operational goal, the provision of the high quality state of the art RF and wireless camera technology to be used in the making of television programmes covering sports, news and light entertainment events. The rental equipment is tailored to the specific task and needs of the client, supported by access to 24/7 technical support and their extensive range of backup equipment.  The company is the exclusive supplier to some of the world’s largest television facility companies and boasts the most innovative RF equipment available in the world.