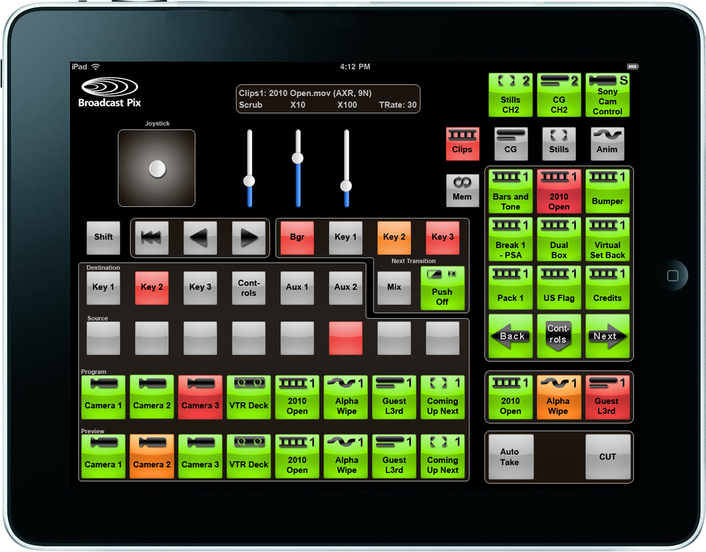 Broadcast Pix iPixPanel for Apple iPad
Broadcast Pix™ announced iPixPanel, its new software application that allows an Apple iPad to control any of its video production systems, is now available for download from Apple’s App Store.

Broadcast Pix has a smaller iPhone app, iPixPad, that has been used by production teams to help produce many live shows, including the webcasts of the red carpet shows for several prominent awards shows. However, the new iPad is large enough to hold all of the controls of a complete live video production studio, so it can be the primary point of control.

The iPixPanel app recreates an entire Broadcast Pix control panel on the iPad. There are controls to preview cameras, add graphics, and take the compositions to air. It can create high-end effects like picture-in-picture boxes of three people for an interview show. Plus it can add clips and logos to the production and even control robotic cameras. The innovative iPixPanel app was honored with one of the Best of Show Vidy Awards from Videography magazine last month at the 2010 NAB Show in Las Vegas, NV.

The iPixPanel app is available for download for $199.99 at

Customers can also download the free iPixPad app for the iPhone or iPod touch, which replicates a portion of the iPixPanel app.

Broadcast Pix is the leader in integrated live video production systems. Its Slate and Granite systems create compelling live video, and they run unique Fluent software that provides a file-based workflow that streamlines production and improves functionality. With their integrated switcher, multi-view, graphics system, clip stores, and aspect and format conversion, there is a fraction of the cost of conventional solutions to buy, staff and operate. Broadcast Pix is based in Massachusetts, with distributors worldwide. Customers include leading broadcast, webcast, podcast, cable, entertainment, mobile, corporate, education, religious, and government studios in over 70 countries. For more information, go to