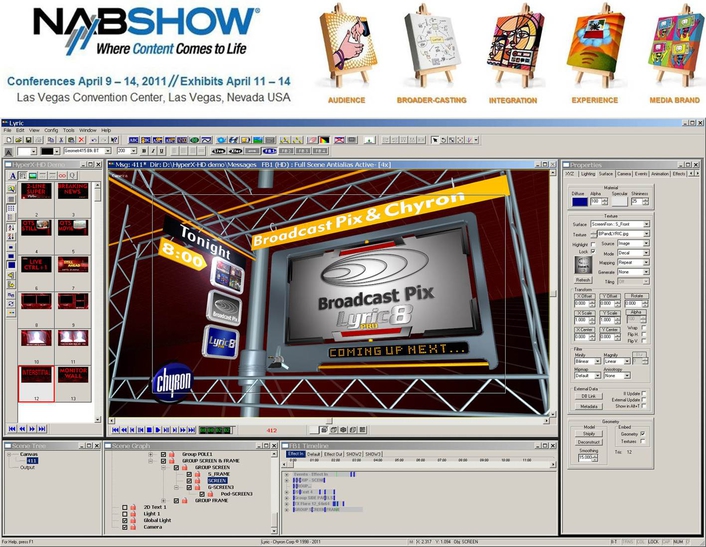 Broadcast Pix has fully integrated Chyron’s Lyric PRO 8 into its system. Producers can use the Chyron software to create sophisticated titles and 3D animations, access them from any Broadcast Pix control surface, see them on its Fluent View display, and play them from its graphic and clip stores. With just a click, titles can be edited live on-air. The system will also run files created on other Chyron systems and take advantage of Chyron’s optional AXIS services, which enable anyone with an Internet connection to instantly access broadcast-quality news graphics, charts, quotes, maps, and weather.

“This is a powerful marriage between the company known for broadcast quality graphics and the company known for broadcast quality integrated video production systems,” said Ken Swanton, president of Broadcast Pix. “We are thrilled to offer our customers a choice of character generators. Now, graphics operators familiar with Chyron can get right to work on Broadcast Pix Granite.”

“We are delighted to be working with one of the leading live video production system manufacturers in the industry,” said Michael Wellesley-Wesley, Chyron CEO. "Chyron's Lyric approach to graphics production advocates open and connected systems throughout the production chain and enterprise. By integrating with the Broadcast Pix system family directly, we bring both workflow efficiency and strong capital value for money without sacrificing quality or functionality. This is a valuable partnership to both companies and mutually extends our reach into the professional and broadcast markets."

As the pioneer of graphics as a service for all digital video media, Chyron (NASDAQ: CHYR) continues to define the world of digital and broadcast graphics with Web, mobile, HD, 3D, and newsroom integration solutions. Winner of numerous awards, including two Emmy® Awards, Chyron has proved itself as the undisputed leader in the industry with sophisticated graphics offerings that include Chyron’s AXIS Graphics online content creation software and order management system, on-air graphics systems, clip servers, channel branding, and graphics asset management solutions.

Broadcast Pix is the leader in live video production systems. Its Granite native HD systems are the only switchers with a content server, to provide the best file-based workflow for clips and graphics. Its Slate systems create highly affordable hybrid HD/SD/analog productions. Both systems create compelling live video by integrating a production switcher with a suite of Fluent file-based software tools, including clip and graphic stores, CG, multi-view, watch-folders and macros. Broadcast Pix systems are a fraction of the cost of a conventional control room to buy, staff and operate. Customers include leading broadcast, webcast, entertainment, mobile, corporate, education, religious, and government studios in more than 80 countries.