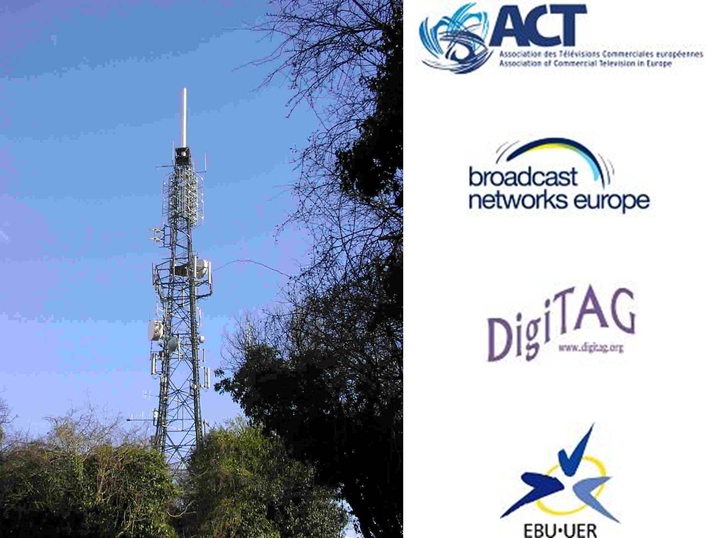 Digital Terrestrial TV (DTT) Platform
The DigiTAG Steering Board has today formally issued with the EBU, BNE and ACT, joint recommendations aimed at ensuring that necessary technical safeguards are adopted to protect the television services, delivered by the digital terrestrial TV (DTT) platform, from interference. New technical safeguards have become necessary following the decision by several national administrations to allocate the 790-862 MHz frequency band (800 MHz band), presently used for broadcasting, to fixed and mobile communications networks. These recommendations are also intended as a contribution related to the multi-annual Radio Spectrum Policy Programme (RSPP) presently in discussion in the European Union institutions.

Commenting on these recommendations, Daniel Sauvet-Goichon, chairman of DigiTAG stated: “With many tens of millions of households across Europe relying on the DTT platform, it is essential for national administrations to guarantee that these viewers can continue to access these popular TV services without any technical interference. Measures must be put in place to protect the quality of their viewing experience.”

Bernard Pauchon, chairman of BNE stated: “Considerable efforts are being made by the whole broadcasting industry to rearrange DTT transmission below 790MHz in order to clear the upper frequencies for other uses. The quality of the services offered by Broadcast Network Operators to broadcasters and citizens has to be protected by European and National institutions”.

Lieven Vermaele, EBU Director of Technology and Development stated, “When viewers have problems with receiving TV, they often contact their public service broadcaster to find out if there is something wrong with the service. If mobile communications were to interfere into digital broadcasting, the screen would simply go black, and the broadcaster would have no way of helping the viewer. It is therefore essential that great care is taken in the planning and implementation of mobile communications in the former broadcasting band, so that the risk of such confusion is totally avoided.”

ACT, the Association of Commercial Television in Europe, represents the interests of the commercial broadcasting sector in Europe. Formed in 1989, the ACT has thirty-one member companies licensed in 30 different European countries and distributed across 45 European markets and beyond. Our members operate several hundred free-to-air and pay-tv channels and distribute many more channels and new services. The ACT members encompass several business models: free-to-air broadcasters and pay-TV players, digital platform operators and multimedia groups.

BNE, Broadcast Networks Europe, is dedicated to maintaining an efficient and fair operational environment for Terrestrial Broadcast Network Operators with a view to ensuring that European citizens continue to receive universal access to a broad range of TV and radio programmes and content as well as other over the air services.

DigiTAG, the Digital Terrestrial TV Action Group, aims to encourage and facilitate the implementation and introduction of digital terrestrial television services using the Digital Video Broadcasting Project's Standards. It has over 50 members from broadcasting, network operators, regulatory, and manufacturing organisations throughout Europe and beyond.

European Broadcasting Union (EBU) serves 86 national media organizations in 56 countries in and around Europe. It promotes the values and distinctiveness of public service media in Europe and around the world. It brings news, sports, events and music to your home through the Eurovision and Euroradio networks. The EBU develops and shares best practices, media expertise and innovation. It produces and exchanges rich and diverse programmes across all media.