For more than 30 years, veteran audio engineer Brian Pannier has mixed sound for countless television programs including sports broadcasts, talk shows, soap operas and more. Most recently, Pannier has been mixing the audio for “Crowd Goes Wild” on FOX Sports 1, where he is using a HARMAN Studer Vista 1 digital audio console.

“Crowd Goes Wild” is a live sports entertainment talk show hosted by Regis Philbin with panelists Georgie Thompson, Michael Kosta, Trevor Pryce, Jason Gay and Katie Nolan, where the group discusses the biggest stories in sports, entertainment and more. “We have six to eight people talking at one time and it’s filmed with a live studio audience, so it’s a fast-paced and very lively show,” Pannier said.

“Crowd Goes Wild” began airing in mid-August and is filmed at a film stage at Pier 60 in New York City. With so many live microphones during tapings, Pannier is tasked with handling a multitude of audio sources. “The audio console needs to be able to accommodate that variety, which the Vista 1 does quite well,” Pannier said. “It’s a small desk but is being used to its complete and full capacity, and it’s performing great.”

While this project marks Pannier’s first experience with a Studer digital audio console, he found the learning curve with the Vista 1 to be minimal, thanks to intuitive features including the Vistonics™ interface and FaderGlow™. “The Vista 1 has proven to be very user-friendly, intuitively laid out and much easier to operate than a lot of digital consoles out there,” he said. “Just as importantly, the sound quality is top-notch.” 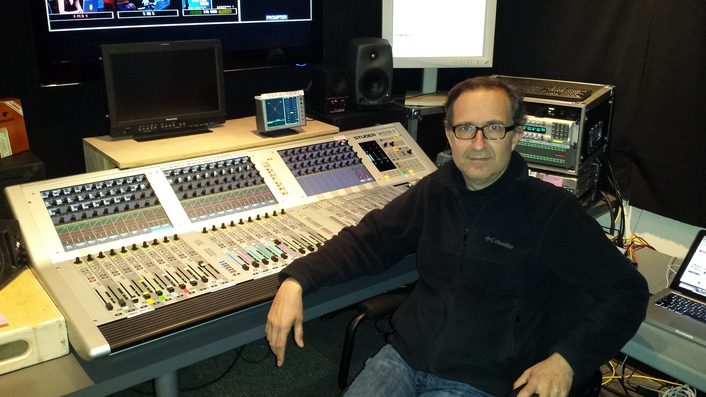 Brian Pannier with the Studer Vista 1

In addition, Studer’s commitment to customer service has paid off in spades. “The relationship I’ve developed with Studer has been great,” Pannier noted. “They’ve been able to give me quick feedback and that’s way above and beyond what I expect as a rental customer.”

Last but not least, the portability of the Vista 1 enables Pannier to transport and configure the console in any space imaginable. “Being able to pick up and move the Vista 1 is incredible and the entire console including the power supply is self-contained,” he said. “I consider this console to be a breakthrough.”