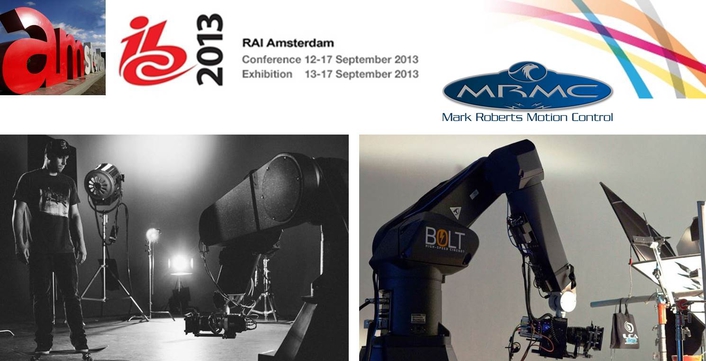 Come by the MRMC booth 11.G35 to see the Bolt High speed rig in action
High speed cameras have been around for some time creating amazing shots in commercials and films shooting high frames rates at 1,000 fps or more. In order to make these shots more exciting directors have been asking how do I get the camera not only shooting fast but also moving fast at the same time.

Mark Roberts Motion Control are proud to announce the successful release of the Bolt high speed cinebot, the most extreme high speed motion control rig in the world - starting and stopping in the blink of an eye. Over the past 12 months MRMC have been developing the newest in a line of high speed precision rigs specially designed for use with high frame rate cameras such as the Phantom Flex, Weisscam, Photron and iSpeed. The Bolt is more than just a high speed rig and can be used in broadcast applications such as news rooms and studios.

Bolt has the ability to get up to full speed almost instantly so that the camera can go from standstill to high-speed motion and back to standstill in fractions of seconds, literally following falling objects and capturing images that would be impossible by hand or any other method. Combined with Flair motion control software, the Bolt rig is quick to program moves and offers all of the features for importing moves from 3D packages and exporting moves.

Bolt is now shipping to worldwide locations and has already been used very successfully internationally. There are now systems in the USA, Europe and South Africa with more continents soon to receive theirs.  As one new user said, “Congratulations on making a fantastic rig. I think officially this is the best thing MRMC have made since the Milo and you can quote me on that! I look forward to doing many shoots with it.”

Bolt’s advantage over any other high speed system is its portability and its simple interface to the industry standard flair motion control software allowing moves to be created in seconds and also giving operators, DPs and Directors all the tabletop programming tools that they might need. Interfacing to turntables, liquid pouring rigs, lights and other special effects devices is straight forward.