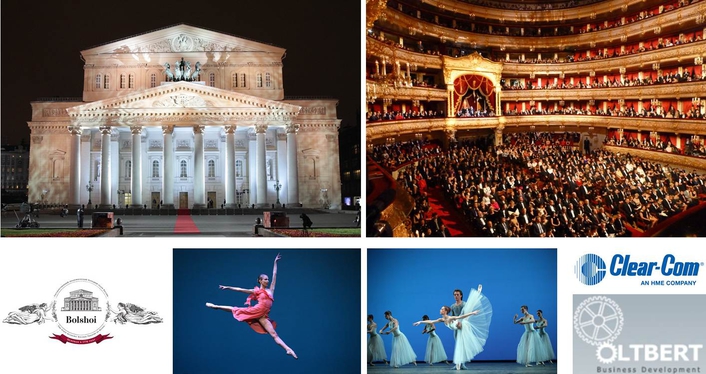 As the oldest and most renowned performing arts center in the world, the Bolshoi Theatre is home to the world-famous ballet school, Bolshoi Ballet Academy, and holds a broad-range of ballet and opera performances. After six years of renovation, the Bolshoi recently re-opened with a set of state-of-the-art acoustic sound systems and production communication equipment.

The 112-port Eclipse-Median system forms the backbone of the threatre’s communications network.  Integrated into the Eclipse are four E-QUE cellular controller cards that enable 44 remote antennas and 13 splitters to power 85 FreeSpeak wireless beltpacks, giving theatre operators the freedom to roam throughout three buildings, which span a total of 13 floors, three stages and underground areas.  All 85 FreeSpeak beltpacks and the splitters have been synchronized to allow the crew to quickly change the number of packs allocated to each stage at a moment’s notice. The theatre director is provided with an advanced V-Series keypanel that connects him with the theatre operators.

With such a wide area of coverage, the intercom system must provide clear, reliable and continuous communications from anywhere on site. The FreeSpeak system was the ideal solution to address this challenge. It features DECT and wireless auto-roaming technologies, which enable users to move freely without fading or losing communication connection. Operating license-free within the 1.8GHz-1.9GHz frequency band (Russia’s approved radio frequency), the production team Bolshoi Theatre requires no special licensing for operation, nor do they need to worry about the system becoming overcrowded with wireless devices. This allows production crews at the Bolshoi Theatre to deliver critical cues with optimal clarity, and assures the safest and most well-executed productions possible.

“In addition to being ideal for large venues such as the Bolshoi Theatre, the FreeSpeak has improved efficiency with its simple functionality,” says Vyachelsav Efimov, Deputy of the General Director of the Bolshoi Theatre. “Not only is it straightforward and fast to configure, but all of the features are only a click or two away, providing a friendly interface for the end user. We have four channels on the FreeSpeak set to a specific talk group, eliminating the distraction of multiple separate conversations on a single channel. We can also arrange the system to isolate communication so that conversations occur only between relevant parties.”

The powerful, reliable and high-quality performance of the FreeSpeak system was a key factor in the Bolshoi Theatre’s decision to choose Clear-Com. The theatre also likes that Clear-Com is able to provide local technical support and service for the system. “We chose Clear-Com based on the company’s equipment, which not only solves all of our problems, but also allows for easy system expansion and, if necessary, future development,” explains Efimov. “We are completely satisfied with our experience with Clear-Com, as well as with their local representative, Oltbert Ltd., and system integrator, Module – T, all of which provided excellent service and support during the installation process.”

“Clear-Com is very excited to have worked with such a prestigious and world-renowned venue as the Bolshoi Theatre on its recent and well-deserved upgrade,” says Vincent Beek, Regional Sales Manager, Northern/Eastern Europe and Russia, Clear-Com. “The Bolshoi Theatre production team now has something that is not only highly functional for the present, but also a system that could grow with them into the future. We look forward to a long-standing relationship with Bolshoi Theatre and wish the entire venue continued success for another 200 years.”