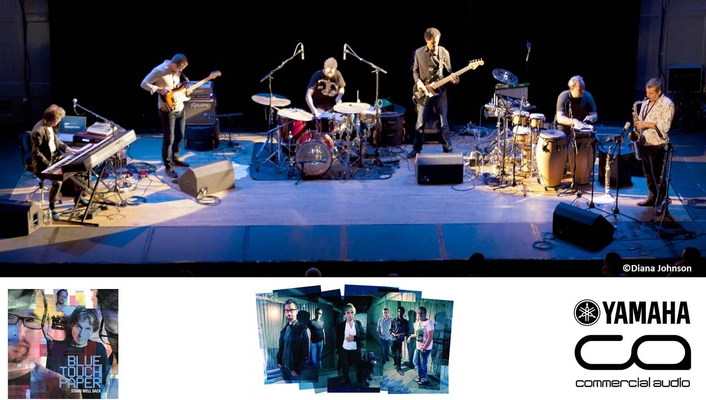 .
In contrast to the current trend for high budget televised talent contests, where the only interest is in vocalists recycling existing songs, many artists promoting new music still have to do so on a shoestring. Such has been the case for Blue Touch Paper. When the six piece band recently played at Edinburgh Queen’s Hall, a Yamaha and Nexo sound system helped the music to sparkle, with even the Herald national newspaper’s critic commenting on the ‘superb sound quality’.

The band is the brainchild of Colin Towns, former rock keyboard player turned high profile film and television composer. A lifelong love of jazz has seen a range of his projects feted by enthusiasts and continental audiences, but never managing to enter the UK mainstream. With Blue Touch Paper he hopes to change that, fusing jazz with rock, pop, funk, orchestral, Latin influences, loops and samples to produce something fresh and accessible.

The band recently undertook its first UK tour, promoting debut album Stand Well Back. Using house systems and mixing consoles throughout, engineer Toby Wood was never sure what he would be using, so he was pleased to find a Yamaha LS9-32 and Nexo PA system at the Queen’s Hall.

Installed last winter, the LS9 was chosen because it satisfied the venue’s very specific requirements. “It was vital that the console was both digital and had a very compact footprint,” says Dave Keay, who alternates with Moray Munro as the Queen’s Hall’s sound engineer. “We have a diverse array of shows here, especially during the Edinburgh Festival, when there are gigs at night and classical recitals during the day. The desk needed to be both easy to use and quick to pack away.”

Toby Wood and Dave Keay at the LS9-32

The latter was important for Toby, who is mixing both front of house and monitors. “Because we’re not touring with a console, I’m using a different one at every show,” he says. “I need a desk that I can walk up to and immediately get a good mix out of. With all the faders on the control surface, the LS9 is perfect for that.

“I also like the other features that make life easier and quicker, like the Tap Tempo function.”

“Nexo produce a very musical sounding speakers,” says Dave. “I’ve always found that they sound nice and rounded for jazz and folk, but with the S2 subs the system has enough power for rock. It’s a very ‘acoustic’ hall and so we don’t push the system too hard. It suits the venue very well.”

“I’m not really doing a full front of house mix,” adds Toby. “There’s a lot of sound coming from the backline, drums and percussion, so I’m really doing sound augmentation, pushing up the quieter sounds to balance them with the louder ones.”

From the chilled feel of the opening few songs to the musical fireworks of the drum and percussion duet by Benny Greb and Stephan Maass, the system handled the dynamics of the performance very well, ensuring a warm reception from the wide demographic in the audience.

“The LS9 and Nexo system were the ideal combination, both for the music and with our having to tour on a tight budget,” says Toby. “They helped to fuse the sound together really well.”

The German Idol's Finale ...from the MMC Studio 30/31
Early Pre-Orders For Yama...vely Surpass Expectations
Yamaha DM1000s Do The Lord’s Work