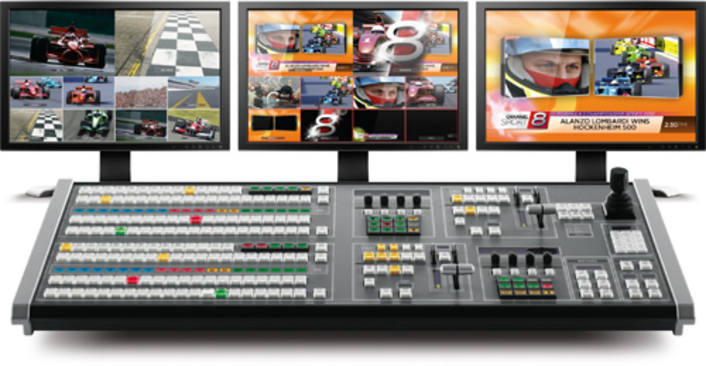 ATEM - Professional Features for Live Production
In August Blackmagic Design announced the acquisition of all assets of EchoLab Inc., one of the world’s leading designers and manufacturers of production switchers. EchoLab had over 35 years of experience in designing and building production switchers since 1974. This experience has culminated in the latest ATEM range of production switchers that include cutting edge technology for world leading features such as up conversion on inputs, multilayer SuperSource™ input, Stinger™ transitions, and built in multi-view monitoring, all in a familiar and affordable, fully digital M/E style design.

For the thousands of people who use production switchers, ATEM will be instantly familiar. It uses the conventional M/E style of design that’s easy, safe and fast to use on even the most critical live production. ATEM also combines powerful features such as SuperSource™, which is a separate multi layer engine with 4 x 2D picture in picture DVE’s and 4 x keyers that provide the same power as adding a whole extra multiple M/E switcher to the ATEM input!

SuperSource can be called at any time, and connects into the switcher as an input. Only SuperSource gives you the power of 4 built in layers of keying, plus 4 picture in picture DVE’s, while keeping ATEM an easy and fast to use conventional M/E style switcher.

ATEM switchers allow previewing of transitions before putting them on air. Users simply select “Preview Transition”, and the preview output of the switcher will show all the elements of the transition, so users can have the confidence to make fast multi layering decisions during live production.

When working with multiple cameras and sources, ATEM saves thousands of dollars on expensive monitoring because it includes a built in multi-viewer that lets you see multiple sources on a standard HDMI television or monitor as well as program and preview outputs. When sources are on-air, ATEM multi-viewer displays highlighted borders, and multi-viewer windows can be custom labeled.

ATEM also includes Stinger transitions for exciting and creative transitions. Stingers can be loaded into the switcher, and are then available on the 2 built in media players. ATEM can hold 32 stills and hundreds of frames of real time clips with alpha channels, so users have a wide range of graphics and clips to play back as animations, supers and stingers. Media players can be selected into any of the 4 built in upstream keyers or the transition block for ultimate flexibility and creativity.

When the 4 upstream keyers are combined with 5 SuperSource layers, the transition block keyer, the 2 down stream keyers and the stinger, even a 1 M/E ATEM switcher can have up to 13 keyers on screen simultaneously. This is the heart of the power of ATEM, and would require 3 M/E’s on other brand switchers.

ATEM can be fully automated with macros, and also includes support for VDCP controlled servers and robotic cameras, all from the ATEM control panel. Customers can use the built in joy stick for controlling cameras, and then recall macros for incredibly powerful operation with very few people. No other switcher allows customers to produce powerful live productions with so few people!

“I have been using live production switchers since I was in school where we covered local theater, sports, racing and bands. I think it’s the most exciting way to do production because it’s all live and thousands of people are watching what you are doing! Production switchers need to be powerful while also being familiar and easy to operate. I think the ATEM switchers from EchoLab are the most exciting switchers I have ever seen, and it’s incredibly exciting to add these products and intellectual property to the Blackmagic Design family”, said Grant Petty, CEO of Blackmagic Design. “The ATEM switcher is a fantastic creative tool, and it includes powerful features not found in any other product. Since the acquisition, we have already dramatically expanded the engineering team working on ATEM. This fresh engineering team, which is a combination of new as well as experienced EchoLab staff, will allow us to move faster in adding new features to the ATEM product. It’s so exciting, I cannot sleep!”