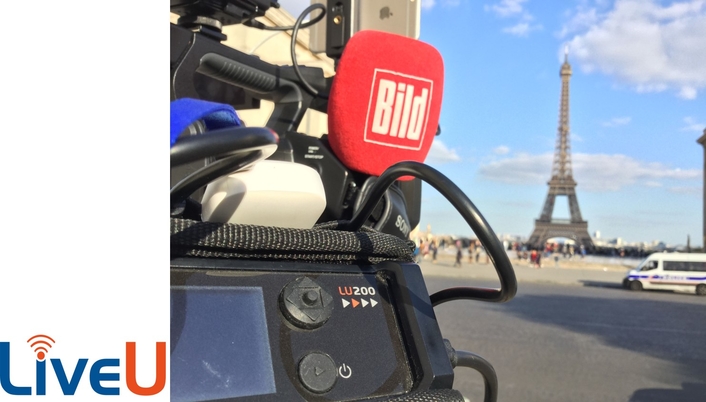 Expanding its use of video, BILD has turned to multiple LiveU solutions to cover events across the country

Best-selling German tabloid newspaper BILD has turned to LiveU to stream live video content across multiple platforms. Already experienced with video, BILD wanted to expand into live video, with more advanced technology than it had been using before.

BILD, which was established in 1952, has had an editorial video office for over ten years, realising earlier than many the power of video. Moritz Wedel, Chief Anchor BILD, said, “We at BILD saw very early that web-hosted video is important for both delivering news and entertaining our readers/viewers. Video has become a permanent fixture of our coverage, equal with text and photos. The next step for us was to move into live video because the web is perfect for this. When we broadcast live, we do so simultaneously to bild.de, Facebook and YouTube.”

BILD never considered the more traditional SNG route to generating live video, describing it as too slow to deploy and expensive. For BILD, it’s key to be faster broadcasters. Moritz said, “When we looked at the technology, we quickly realised that cellular bonding was the way ahead for us. We tried to test as many products as we could but LiveU was by far the most responsive and easy to deal with. The set-up and initiation of the test devices was also very quick and effortless. Global support, rental of additional units for special events and the fact that LiveU technology has been used for many years by hundreds of media companies also played a crucial role for us.”

BILD has covered many events using LiveU technology. These include the G20 Summit in Hamburg, the French presidential elections, broadcasting from Paris, and a countrywide tour the paper undertook this summer, broadcasting live from a variety of locations.

Ronen Artman, VP of Marketing with LiveU, said, “We are seeing significantly increased usage of our technology by a huge range of media companies. We’re very pleased that a paper with the reach of BILD, and one that so quickly realised the power of video, is using our technology. It’s clear that it’s helping to position their business for the future as the use of live video is only going to grow.”

LiveU is driving the live video revolution, providing live video streaming for TV, mobile, online and social media. Let your audience become part of your story with high-quality and flawless live video, transmitted from anywhere in the world, through the use of our patented bonding and video transport technology. LiveU creates a consistent bandwidth and a reliable connection so you can acquire, manage and distribute high quality remote live broadcasts over IP. Our broad portfolio of products sets the industry standard for live video production. From backpacks to smartphones, and satellite/cellular hybrid to external antenna solutions, LiveU offers a complete range of devices for live video coverage anytime, anywhere. In addition, LiveU offers extensive cloud-based management and video distribution solutions. With over 2,000 customers in 80+ countries, LiveU’s technology is the solution of choice for global broadcasters, online media, news agencies and social media.