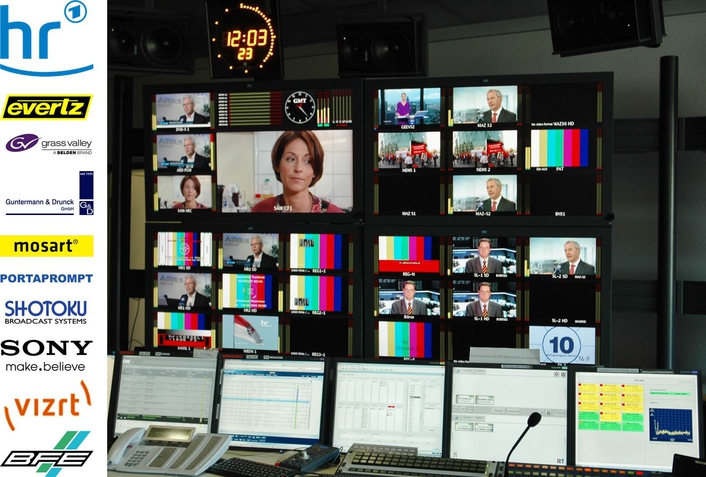 .
Earlier this year, BFE Studio und Medien Systeme GmbH was appointed by the German public service broadcaster, Hessischer Rundfunk, to upgrade the virtual studio and automation technologies of control rooms 2 and 3 in the already existing complex 5.

The project also included the complete renewal of the infrastructure audio/video to HD technology with virtual studio and automation technology for the news studio K and the news control room K.

The special challenges in the realization mostly concern a fast transmission change, flexibility in changing program requirements and assurance of a safe 24/7 operation with few staff. To do so, BFE chose Vizrt for the virtual studio technology, Mosart for the automation system and Shotoku for robotic tripods and tracking technology. Further key components in the project were Grass Valley HD cameras, Sony MVS 3000 video mixers, Evertz HD routers and multiviewer, Ultimate Keyer, a Guntermann & Drunck KVM System as well as a Portaprompt teleprompter. The entire furniture was made in the BFE own joinery in their premises in Mainz.

Furthermore, an update of the KSC control system developed by BFE was carried out in the control rooms 1, 2 and 3. The project was realized in two steps – complex 5 could be successfully transferred in the broadcasting mode on Sep 1, 2014. The news control room K and the studio are currently being implemented. The entire project is scheduled to be completed in March 2015.

About Hessischer Rundfunk (hr)
Hessischer Rundfunk (hr) is a public institution (national broadcaster) for the State of Hesse headquarted in Frankfurt am Main. In addition it runs external studios in Hesse and Berlin as well as some ARD correspondent offices abroad.
hr is a member of the consortium of the Federal Republic of Germany’s public broadcasters (ARD).
Hessischer Rundfunk produces radio and television programs alone or in cooperation with other broadcasters and is characterized by regional information and entertainment programs, such as news programs, documentaries, music programs, advice programs, cultural magazines, movies and reports.