Viz Virtual Studio Software helps Azteca (Mexico) build unique on-air designs and improve ratings
Azteca, one of the largest television broadcasters and content producers in Mexico, has expanded its use of 3D graphics and virtual reality (VR) set technology from Vizrt, a leading provider of production systems for the digital media industry, at its main production facility in Mexico City.

Following its successful creation and use of captivating Vizrt graphics and VR technology on-air during TV Azteca’s 2014 World Cup coverage this past summer, the international multimedia company recently installed a new five-camera VR studio to produce advanced virtual sets and augmented reality effects for its wide variety of sports and entertainment programs.

The studio is a fully virtual blue-screen cyc wall that’s part of the 360-degree studio backdrop with no real screens or video walls. All on-set “screens” (some with live video) are virtual. Augmented reality elements are being added as well. TV Azteca is a long-time Vizrt customer, having used Vizrt content production tools since 2003 and upgrading a smaller virtual studio late last year while gearing up for the 2014 World Cup tournament.

“There are many advantages to going with a virtual studio, including cost savings associated with hard sets, maintenance and the flexibility to change the look of individual shows rather easily,” said Rodolfo Reyes Soni, Head of Sports Production at TV Azteca. He added that the real challenge is calibrating five different lenses for the different tracking systems, and then synchronizing them to make it match with the real talent on set.  “All of our producers and technical teams are very happy with the new designs and program elements they can create, which they could not do before. And, we are just scratching the surface of what can be accomplished.”

In the new studio, the VR pedestal can roam freely around the set as can the VR adapted crane arm. On most production days, a dedicated graphics team works to develop the various studio scenes, which are updated daily with new virtual elements for branding, statistics and advertising. 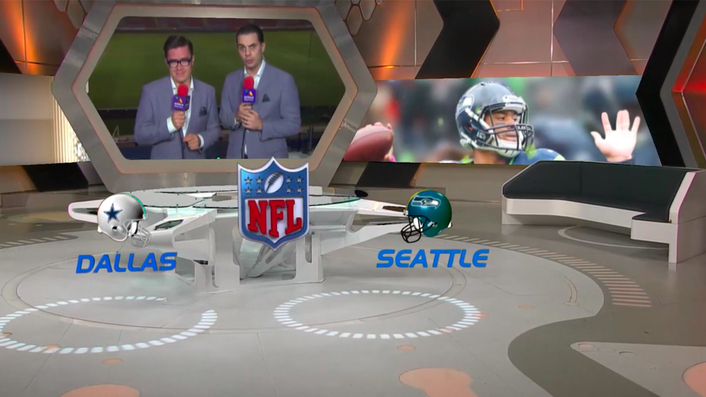 “Azteca is a pioneer in its region for understanding the flexibility and value of a virtual production environment and putting it to good use,” said Petter Ole Jakobsen, Vizrt CTO. “We’re seeing more and more broadcasters and production studios of all kinds increase their use of virtual set technology because it makes economic and practical sense and allows creative teams to do more with the same resources. And these customers are seeing higher viewer ratings as well.”

Viz Virtual Studio integrates with a wide range of camera tracking solutions and external studio peripherals. Custom scenes for a set are created with Viz Artist, where the graphic designers build, animate, and compose their virtual environment.

About Azteca:
Azteca, previously TV Azteca, is a Mexican multimedia conglomerate owned by Grupo Salinas. It is the second largest mass media company in Mexico. It owns two nation wide television networks, Azteca 7 and Azteca Trece, and operates a third, Proyecto 40. All three of these networks have repeaters and affiliates in most major and minor cities.TV Azteca also operates Azteca 13 Internacional, reaching 13 countries in Central and South America, and part of the Azteca América network in the United States. Its flagship program is the newscast Hechos.