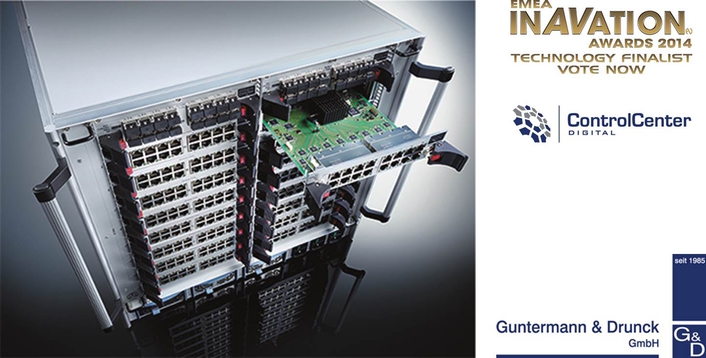 AV experts from around the world will vote for the industry’s most important developments on February 5, 2014. On the second day of ISE 2014, and from experience the day with the most visitors, the winners will be announced in a ceremony. A special honour for Guntermann & Drunck since the jury has already named the KVM matrix ControlCenter-Digital as a finalist in the category “Control Room Solutions”.

What are finalists made of?
Guntermann & Drunck (G&D) developed their modular KVM matrix in close cooperation with and according to the needs of their customers. To adapt with every branch of business, every application and every scenario, all components can be flexibly expanded and replaced; controller and switch card, I/O cards, configuration chip, power packs and fan cards as well as any system components.

Therefore, the 288, 160 or 80 dynamic ports of the KVM matrix switch allow the setup of a flexible computer/workstation matrix that auto-detects computer or user modules - without the need for additional configuration. The ControlCenter-Digital deserved its nomination as “Control Room Solution”: Boot loader, operating system and firmware of the ControlCenter-Digital form a trusted computing platform to protect the system against third-party manipulations. An integrated Trusted Platform Module (TPM) protects any access and configuration data against exposure with a RSA encryption process and with 2048 bit key length. Sensitive information such as login data and passwords are stored permanently with encryption.

Expanding existing structures
All components are connected via LAN infrastructure (twisted pair or fibre optics, mixed mode possible). Here, fibre optics are able to bridge distances of several kilometres between computers and users. With distances that large, administrators and users are now able to continue their work without disturbing the other. Users also benefit from quiet workstations without computers, yet still being able to directly access the entire computer portfolio.

From A like Audio to V like Video
By operating heterogeneous computer installations with the ControlCenter-Digital, you can connect multiple signal sources and signal loads like
Bidirectional stereo/audio
Keyboard/mouse (USB and PS/2)
RS232 and USB 2.0 transparent in full speed via twisted pair cables
Video in HD resolutions (DVI single link, VGA, DisplayPort).
This way, it is possible to integrate and use any common video formats with the matrix.

In the focus: Channel grouping, USB pinning, Stacking, CDS
By grouping channels, multiple computers can be combined to one console. This also applies to multi-monitor workstations of computers with multiple video outputs. This way, grouped channels can be easily switched together.

Groups cannot only include multiple image sources, but other signals as well. Now, USB 2.0 and RS232 signals can also be switched in a group. When switching between computers, “USB pinning” holds the USB signal at the active computer to avoid cancellation of the process as well as data loss.

To become even more flexible and able to grow further, the existing ControlCenter-Digital can be used as the master of more devices of the same type. By stacking the matrix, multiple matrix switches can be switched in parallel to the master system. The ports of stacked switches are auto-switched at the same time as the master system - without the use of manual switching commands.

When applying CrossDisplay-Switching, the mouse becomes the ultimate switching tool. If the cursor moves from one screen to the next, KVM auto-switches to the next computer and even takes along the audio stream. This feature can be conveniently administrated in the web interface of the ControlCenter-Digital.

Taking a closer look at the finalist
At ISE 2014, G&D will present monitoring functions via web interface, SNMP and Syslog, network connection for switching between computers, external authentication, the integration of media controls, CrossDisplay-Switching and other highlights. If you want to take a look at a proud award finalist, come to ISE stand 10-R116.