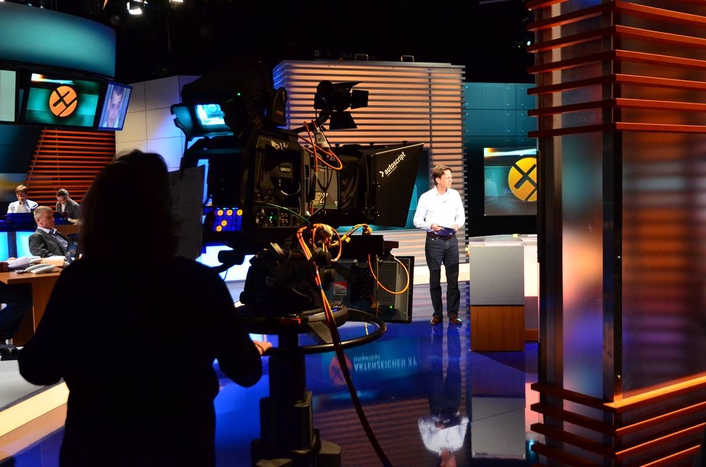 Unique, mobile teleprompting system brings speed and accuracy to field operations
Autoscript, part of Vitec Videocom, a Vitec Group company, has announced the launch of WinPlus Remote, an iOS-based teleprompting system that delivers up-to-date scripts to users in the field, anywhere in the world. The technology is also suited to remote news bureaus and smaller newsroom operations.

When WinPlus Remote is installed on a networked PC in the production facility, the latest version of the script can be seen by journalists on location, as well as in the studio. The software enables the script to be automatically uploaded to an FTP site where it can be downloaded onto an iPad by talent in the field and kept constantly updated. WinPlus Remote, developed by market leader Autoscript, works in conjunction with an iOS app, picoPrompt, and the iScroll Hand Control package, both created by Teleprompting Techniques.

“There have been iPad prompting apps on the market for some time,” says Robin Brown, product manager, Autoscript. “However, the link to the newsroom has been missing, which effectively means that there is no access to live updated scripts on location. Now, with WinPlus Remote, field talent can quickly and easily download the latest script from the FTP site by simply connecting their iPads to the network.

“This brings both speed and efficiency to remote staff, as well as increased accuracy. Instead of having the director conveying the script changes via an ear piece and a journalist having to manually make the changes, this system allows them to refresh the script with the click of a button. In this way they will always have the latest version of the script on their iPad, allowing them to focus on the task at hand, such as reporting on breaking news.”

The WinPlus Remote system is ideal for use in applications where news is being updated constantly, such as sports reporting. It is also suited for use in locations where a prompting system with full camera unit and software products isn’t available or practical. In addition, WinPlus Remote can be used as an add-on in facilities where other prompting software systems already exist.

“You don’t need to be a current WinPlus user to benefit from WinPlus Remote. If a newsroom is running other prompting software, WinPlus Remote can be used in parallel. It effectively runs in the background and enables technicians to take the same script as their current prompting solution and upload it to the FTP site where the field talent can access it,” says Brown.

The system is therefore also ideal for smaller news operations with limited budgets as it is a cost-effective alternative to a full software system.

WinPlus Remote is being officially launched at NAB in April and will be available from Autoscript. picoPrompt can be downloaded via the Apple App Store and iScroll Hand Control may be purchased directly from Teleprompting Techniques.

About Autoscript
Autoscript is the world leader in the prompting industry, providing professional teleprompting equipment to broadcasters across the globe. Established in the UK in 1984, with headquarters in the UK and the US, Autoscript designs and builds innovative hardware, PC cards and software to meet real world needs and continually enhance the production process. A prime example of this is Autoscript’s latest product, the E.P.I.C. (Enhanced Prompting Information Centre), an all-in-one prompter display and on-air talent monitor that vastly simplifies studio equipment, reduces power consumption and enables easier location prompting. Autoscript is a member of the Vitec Group.