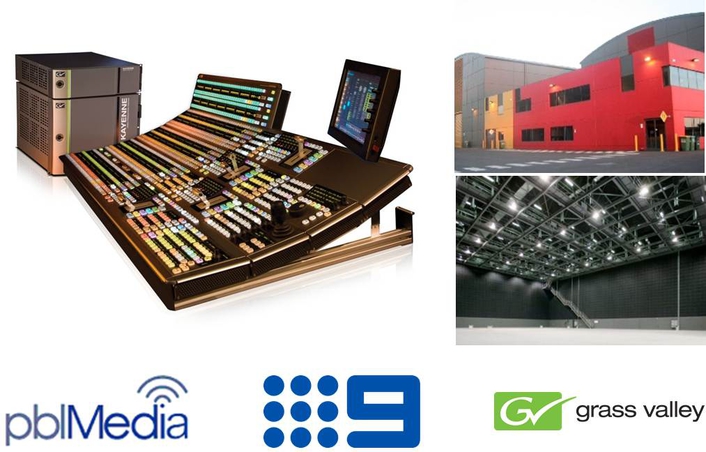 Grass Valley will provide System Integration services in the new state-of-the-art HD facility, set to be completed in early 2011
Australia’s Nine Network has contracted with Grass Valley™ to ensure a smooth relocation of the network’s GTV-9 studios from its current location to new high-definition studio facilities in the Docklands district of Melbourne. Grass Valley is providing its system design and integration expertise to install a full complement of legacy and new third-party HD production equipment, as well as two 2.5 M/E Kayenne™ Video Production Center switcher systems inside two new HD control rooms.

Grass Valley will provide a wide range of System Integration services in the new state-of-the-art HD facility, set to be completed in early 2011. This relocation is within a new multi-story office tower housing other business divisions of Nine’s parent company PBL Media. The new studios for GTV-9 will include two video control rooms and attached audio control that will produce daily live news and current affairs programming as well as panel-style talk shows to spotlight its sports and magazine TV-style reporting.

“Grass Valley was short-listed after the first round of tender responses was reviewed on the basis of the total project cost and the quality of the submission,” said Charles Sevior, Network Manager Broadcast Technology at Nine Network. “Grass Valley’s track record on recent system integration projects and the quality of their project management were also taken into account.”

Video sources within the two new HD studios will be managed by a 3 M/E Kayenne production switcher panel in the larger studio, allowing for a future ME upgrade as required, while a 2 M/E Kayenne panel will control the second, smaller studio. Both switchers were purchased with the optional 2-channel ClipStore™ clip storage system, which includes a fully integrated Grass Valley K2 Solo™ media server with ChannelFlex™ for double the video capacity per channel. Once installed, ClipStore will allow GTV-9's operators to store and recall video clips from within the Kayenne’s ImageStore™ menu panel and E-MEM/cue systems.

ChannelFlex allows two video fill and key streams to be played back simultaneously from a single K2 Solo channel and works in tandem with the Kayenne’s current internal ImageStore system.

“The new Kayenne switcher represented an excellent progression for our operators who have become familiar with the Grass Valley control panel layout and operation during the past 10 or more years that Grass Valley switchers have been used at our existing studios,” Sevior continued. “The Kayenne’s macro functions and the flexibility of its panel delegation assignments, all combined into a next-generation design, also contributed to Grass Valley being awarded the contract.”

“Grass Valley has completed a number of successful system installation projects over the past few years and we've seen this business increase as our customers come to understand the many ways we can help them achieve their goals,” said Jeff Rosica, Senior Vice President of Grass Valley. “We have supplied equipment to the Nine Networks for many years and this latest project is really an extension of that relationship and how well we work together.”

The 2 RU ClipStore integrated server system allows Kayenne users to access a huge library of SD or HD video for animations, replays, or any other type of video. The existing six optional ImageStore Channels (for stills) are not tied up when using the new K2-based ClipStore system for video. The ability to create folders and clip names has also been incorporated within the ImageStore menu to make it easier to manage the large amount of content now available.