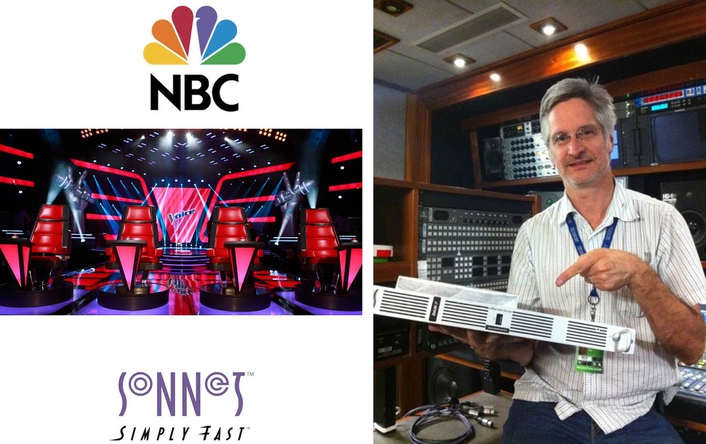 "We’re glad that Sonnet is now targeting the pro audio community in a big way," Hugh Healy stated
A well-known and busy audio engineer, Hugh Healy specializes in providing audio workstation solutions for a broad range of live television productions – most recently NBC’s “The Voice” and the 2013 Academy Awards®, Grammy Awards, and Academy of Country Music Awards®. As a primary contractor for the one of the largest suppliers of remote broadcasting facilities in the U.S., Healy is closely acquainted with the challenges of mobile audio production for live entertainment events.

In a high-pressure live audio workstation environment, adequate computing horsepower is critical for handling the massive volume of audio tracks to be recorded, played back, mixed, and edited. On “The Voice,” for instance, Healy used two computers that handled 64 audio tracks each. Most recently, Apple® Mac Pros have been fixtures in live audio production because of their performance and extensibility – but they’re not ideal in a mobile environment. “Since Mac Pros are tower computers, they’re heavy and they don’t rack mount easily,” Healy said. “We usually have to carry them onto the truck and place them somewhere on the floor where they get jostled around and are generally in the way. We like to call them ‘space heaters.’”

On the opposite end of the spectrum is the Mac mini – a groundbreaking computer that in some ways eclipses the current Mac Pro’s performance at a fraction of the cost – featuring Thunderbolt technology in a highly portable form factor. But its extra-small footprint and lack of PCIe expansion slots also creates issues in a mobile environment. “It occurred to us that if we could find a way to rack-mount a Mac mini where it could be easily cabled and attach expansion slots with Thunderbolt connectivity, we’d have the ideal solution for on-location audio workflows,” Healy said. “Fortunately, we didn’t have to re-invent the wheel – we found just what we were looking for with Sonnet’s xMac™ mini Server.”

A product of Sonnet Technologies, the xMac mini Server is a Thunderbolt™-to-PCIe® 2.0 expansion system and 1U rackmount enclosure that securely holds the Mac mini in place. Most importantly, the system increases the Mac mini’s functionality and connectivity with two PCIe 2.0 expansion slots that connect to the computer’s Thunderbolt port, with an additional port on the chassis for daisy chaining to other Thunderbolt devices.

After working with a beta version of the second-generation xMac mini Server, Healy partnered with Sonnet to adapt the system to the specific requirements of audio production. A Sonnet engineer even visited the set of “The Voice” to understand how the system could be enhanced for use in a live audio setting. “The Sonnet team was great to work with and was extremely receptive to the suggestions we made – such as adapting the mounting holes, re-thinking the cooling systems for the types of cards we typically use in audio, and modifying the cable attachment scheme on the rear of the chassis,” he said.

From the collaboration, Sonnet incorporated many of the suggested enhancements into a significant upgrade of the xMac mini Server in May that supports a PCIe card and its daughter card in one slot, includes BNC connector mounting holes on the enclosure’s rear panel, and still retains the remarkably slim 1U rackmount profile. In addition, Sonnet shortened the chassis depth to a streamlined 15.8 inches, making it ideal for deployment in a wider range of mobile racks, carts, and rack cases. “It’s always refreshing when a hardware vendor actually listens to its customers and stays open to making changes that will better meet their requirements,” Healy commented. “Since it’s less than 16 inches deep, the xMac mini Server is now even better-suited for the space- and weight-constrained environment of a truck or mobile equipment cart.”

With the new card slot configuration, the xMac mini Server now accommodates a daughter card that can be mounted directly over its “parent” PCIe card via a special mounting bracket, thereby saving the additional PCIe card space. This makes the system ideal for audio workstations using pro audio PCIe cards such as RME’s HDSPe MADI FX. Healy, for instance, has built a workstation with two different RME MADI FX cards, each providing three MADI inputs and outputs for a total of 192 I/Os available for recording and playback. “That is a tremendous amount of audio I/O, and it’s a great example of how we’re able to take advantage of the outstanding performance of the Mac mini in an audio workflow,” Healy said. “The system’s expanded Thunderbolt connectivity gives us the ability to use the attachments we need.”

In addition to supporting the RME MADI FX cards, the xMac mini Server gives Healy the ability to drop in a Sonnet eSATA card, which provides lightning-fast Thunderbolt connectivity to external eSATA drives. “The eSATA capability is a huge timesaver, because it means we don’t have to spend an hour or two after the show copying files – and we’re not lugging around big Mac Pro boxes,” he said. “And since the Mac mini computer itself is only a thousand dollars, you can buy a couple and keep one as a spare for a much lower cost than a Mac Pro.

“We’re glad that Sonnet is now targeting the pro audio community in a big way, and with products like the xMac mini Server, I believe it will be very successful in our market. There really isn’t another device out there quite like the xMac mini Server, which lets us take this ridiculously powerful and compact Mac mini computer and mount it in a truck environment where it is easily cabled and expanded through the magic of Thunderbolt,” Healy added.