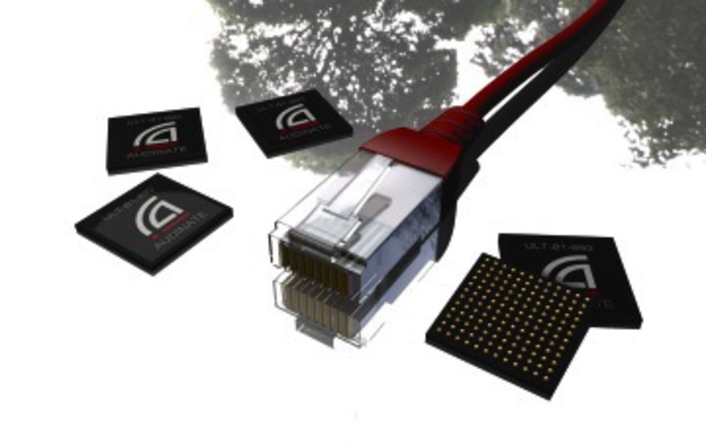 New 4x4 Channel Member of Ultimo Low Cost Product Family Announced
Audinate, the market leader in digital media networking for the A/V, conferencing, public address, and broadcast industries, announced it is adding a new product to its Ultimo family of products. The new Ultimo (ULT-01-004) supports 4x4 channels of uncompressed audio, double the capacity of the Ultimo (ULT-01-002) introduced at the beginning of 2013. Ultimo is part of Audinate’s portfolio of high performance Dante solutions and is a family of complete, fully-featured, ready-to-use, single-chip Dante™ solutions for networked audio products.

Coinciding with the launch of the new 4x4 Ultimo chip, the complete Ultimo product family will be enhanced to support an even richer set of features including:

“The new Ultimo chip option, together with the enhanced set of features, opens up a new range of products for our OEMs who wish to have cost effective networked audio-over-IP products using Dante”, said Gary Southwell, Audinate’s Vice President of Product Management. “It provides our customers a system on a chip that simplifies design of a whole new category of products. Dante is recognized by our OEMs to be the easiest feature-rich networking technology to implement, and by their customers as the easiest networking solution to deploy.”

Several OEMs are already developing products based on the new Ultimo features and options, which will be generally available in Q1, 2014.

About Audinate
Audinate revolutionizes AV systems to enable our customers to thrive in a networked world. Audinate’s patented Dante media networking technology has been adopted by 120 OEM manufacturers in the professional audio/visual industry. Dante is used extensively for live performance events, commercial installation, broadcast, recording and production, and communications systems. Audinate is a Promoter Member of the AVnu Alliance™. Audinate offices are located in US, United Kingdom and Australia.