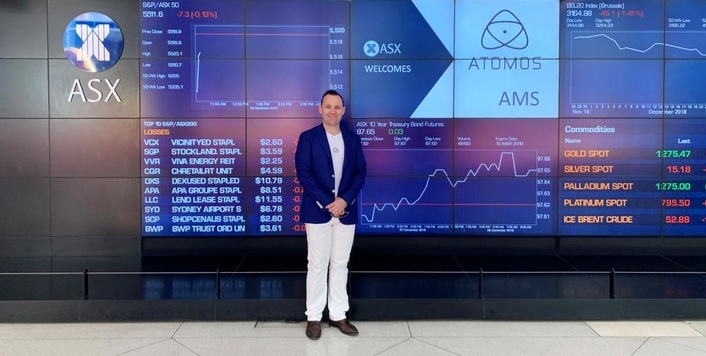 CEO Jeromy Young, who co-founded the Company, said the IPO and ASX listing was a key step in continuing to grow Atomos presence in the burgeoning video content creation market.

Atomos Limited (ASX:AMS, “Atomos” or the “Company”), a global video technology company delivering award-winning, simple to use and affordable monitor recorder content creation products, commences trading on the Australian Securities Exchange (ASX) today following the completion of an Initial Public Offering (IPO) which raised $6 million through the issue of 14,634,146 new shares at $0.41 per share. At the IPO issue price Atomos has a market capitalisation of $62.2 million.

•  Founded in 2010 and has since established operations in seven countries

•  Current core range of seven products, planned to double in next 12-24 months

•  Highly regarded board of directors with broad, global experience

Atomos’ devices take images directly from the sensor of all major camera manufacturers, then enhance, record and distribute them in high-quality formats for content creation using the major video editing software programs. Atomos has developed a range of seven products including the Ninja, Shogun and Sumo, designed to address the different segments of the video content creation market from Social through Pro Video and Entertainment. Since commercialising the world’s first video monitor recorder incorporating Apple’s ProRes video format, Atomos has developed strategic relationships with key technology providers within the ecosystem including Apple, Adobe, Sony, Canon, Panasonic, Nikon & JVC Kenwood. With the rapid growth in high-quality and accessible video content creation, Atomos is uniquely placed to take advantage of this growing global trend.

Atomos’ product portfolio addresses a US$10 billion¹ camera equipment market, making equipment that drives social and corporate video content. It is focused on expansion into the growing Social and Entertainment video content markets, as well as continuing to build upon its success in the Pro Video segment. Based in Melbourne, Atomos was founded in 2010 and has established a strong sales network and international operations, with 74 employees across seven countries. Atomos will use the funds from the IPO to support the Company’s global growth strategy, including expansion into adjacent growth segments of Social and Entertainment, as well as the launch and deployment of new products from its newly developed platform as showcased in the recently released Ninja V.

After R&D investment of $39 million in this platform, Atomos intends to utilise this development and double its product range over the next 12-24 months. The IPO was heavily supported by several local institutional investors. In a show of confidence in the prospects of Atomos, almost all existing shareholders in the Company prior to the IPO have agreed to voluntary escrow for between 6 and 24 months. Atomos lists on the ASX having achieved revenue of $35.6 million in FY18, with 49% of its sales in the USA, 30% in Europe, the Middle East and Africa, and 21% in Asia. For FY19 the Company has provided pro forma forecast revenue of $42.2 million at a projected gross margin of 47%.

CEO Jeromy Young, who co-founded the Company, said the IPO and ASX listing was a key step in continuing to grow Atomos presence in the burgeoning video content creation market. “We’ve spent many years investing in silicon and software technology development to give Atomos an advanced offering with proprietary processing and trade secrets that underpin our product line,” he said.

“This technology, combined with our established brand and outstanding key relationships, place Atomos in an ideal position for continued growth. I’m extremely proud to be able to share the growth in value of the business with external investors as well as with the employees that are building the company together.”