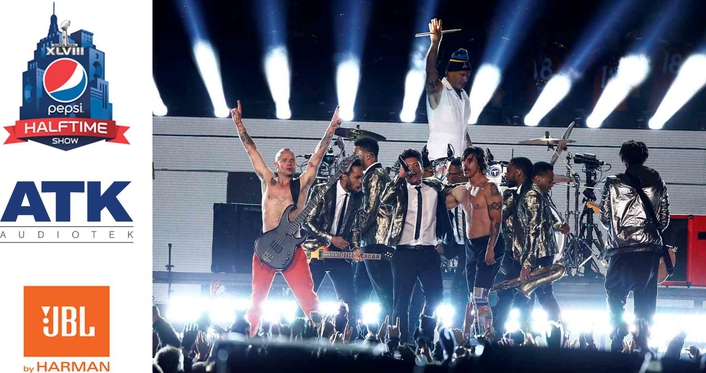 In a battle between the league’s top-ranked offense and defense, Super Bowl XLVIII, broadcast via FOX, reached an estimated 112 million viewers. This year’s Halftime show featured popular pop-singer Bruno Mars, with a special guest performance by the Red Hot Chili Peppers. The Post-Game Show featured the presentation of the Lombardi Trophy to this year’s NFL champion Seattle Seahawks. 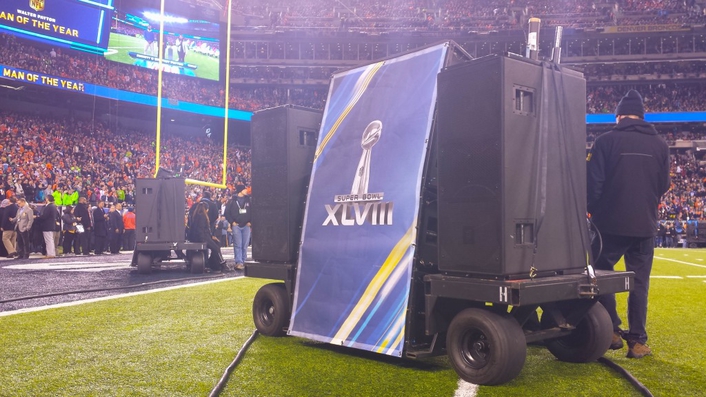 One of the16 custom-designed field carts

For the event, ATK Audiotek deployed 16 of its custom-designed field carts, which allow for easy transport and setup of the JBL VERTEC loudspeakers on and off the field. The system featured 14 carts equipped with four boxes of VT4889 line array elements (56 total), two carts with five boxes of 4889’s (10 total), and each cart was also equipped with two VT4880A fullsize arrayable subwoofers (36 total). Additionally, ATK Audiotek mounted eight VRX932 Constant Curvature loudspeakers on the back of several carts for field fold back, deployed four VT4886 loudspeakers on two popup stands for coverage of the seats behind the stage, and used four more 4886’s for front fill.

“We have come to rely on the consistent performance and sonic capabilities of JBL’s VERTEC line arrays for our systems at the Super Bowl events each year,” commented Kirk Powell, Engineer in Charge for ATK Audiotek. “The Super Bowl is always the most-viewed television event of the year and when you add in the live-broadcast aspect you need to have a system that delivers high quality results with no failures. JBL’s gear has more than met that requirement and that’s why we continue to go back to the VERTEC’s every year.”