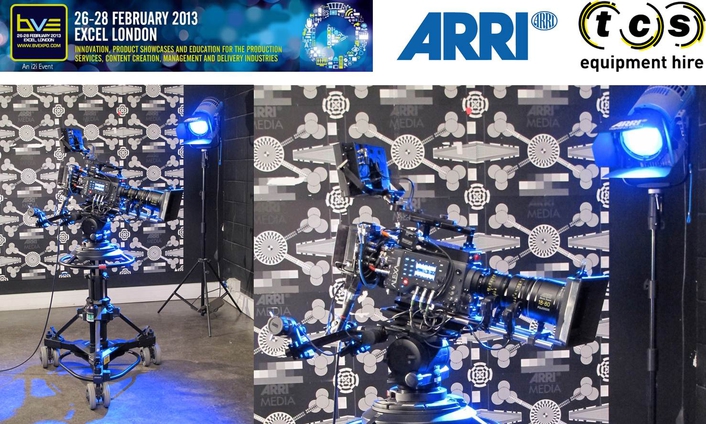 .
ARRI has chosen a Vinten Osprey Elite pedestal plus a Vector 430 pan and tilt head from The Camera Store (a Vitec Group company) as part of an ALEXA camera demonstration scheduled for BVE 2013 in London's ExCel, 26-28 February. The demonstration is being arranged by ARRI CT in conjunction with ARRI Media.

"We will be showing on stand E38 the ALEXA 'Broadcast' Fibre Remote Option which is designed for broadcast production applications," comments Bill Lovell, Head of Digital and 3D at ARRI Media. "The Camera Store has worked very successfully with us on earlier projects and is an ideal partner for this exhibit. Vinten's Osprey Elite pedestal and Vector 430 head are familiar to many TV camera operators. They form an ideal match for the ALEXA Broadcast camera, delivering outstanding lateral and vertical manoeuvrability."

"We are very pleased to be co-operating with ARRI in this demonstration," adds Tim Highmoor, Head of Rentals at The Camera Store. "ARRI's ALEXA cameras offer outstanding image quality, having been developed to meet the demands of digital cinematographers. Visitors to the BVE 2013 show in London will be able to experience the ergonomic excellence of the Osprey Elite pedestal and Vector 430 head combined with one of the best cameras on the market."

The Vinten Osprey Elite is designed to support the latest range of digital, portable and full facility cameras for both studio and outside-broadcast productions. Its two-stage column offers on-shot movement from a minimum height of 66 centimetres to a maximum of 143 centimetres and features full crab and steer facilities controlled from a central steering ring. The studio version includes cable guards, whilst the larger wheels of the outside-broadcast version offer greater ground clearance. Both versions have an exceptional combination of lightness and structural integrity giving maximum stability whilst still allowing the column and dolly base to fold for easy transportation. The Osprey Elite is also ideal for use on track when combined with Vinten's Tracking Skid. Other optional accessories include a portable hand pump to counterbalance the pneumatic system, a large steering ring and outside-broadcast wheel cable guards.

Vinten's Vector 430 pan and tilt head is designed to carry a camera plus a compact box lens or large EFP barrel lens. It allows precise balance to be achieved across a 10 to 43 kilogrammes payload range which would otherwise require two separate heads. The Vector 430 retains the functionality associated with the Vector, including Vinten's infinitely adjustable Perfect Balance and smooth TF drag technology. The Vector 430 is available with a flat or spherical base.

ARRI's ALEXA is a versatile camera range, offering high quality image capture at up to 120 frames per second. The ALEXA Fibre Remote Option is designed for use in a multi-camera environment such as outside broadcasting. With the Fibre Remote Option attached, the ALEXA is connected via an SMPTE 311M hybrid link and allows live painting under remote control. The ALEXA has a 35 millimetre high-resolution CMOS sensor, optionally downsampled to HD resolution. Onboard recording is in Apple QuickTime/ProRes or Avid/DNxHD file format, to SxS PRO memory cards.

About ARRI
Located in Munich, Germany, Arnold and Richter Cine Technik was founded in 1917 and is the largest manufacturer of professional motion picture equipment in the world. Throughout its 95-year history, ARRI has been associated with constant innovation and revolutionary technologies in all of its core businesses. The company is involved in all aspects of the film industry: engineering, design, manufacture, production, visual effects, postproduction, equipment rental, laboratory services and studio lighting solutions.
ARRI Media is a leading UK camera and grip rental company, offering ALEXA and other digital cameras, 35mm and 16mm film cameras and a full range of lenses and support equipment to feature film, TV drama, commercials and music productions, from it’s base in Uxbridge. TV projects supported with ALEXA cameras by ARRI Media include “Downton Abbey” (Series 2, 3 and 4), “Mr Selfridge”, “Luther” (Series 3), “Game of Thrones” (Series 1, 2 and 3); feature films include “Skyfall”, “Trance”, “Gravity” and “Rush”.

About The Camera Store (TCS)
Established in 1996 and based in West London, The Camera Store (a Vitec Group company) draws on many years of experience as television cameramen to guide clients in their choice of equipment. It has a large stock of standard equipment, including pedestals, tripods, heads, crane arms, lighting, fibre-optic cable and camera-support accessories. The Camera Store offers a countrywide rapid response delivery and collection service embracing large or small items. It is always ready to meet the challenge of improving existing kit or developing new production tools.