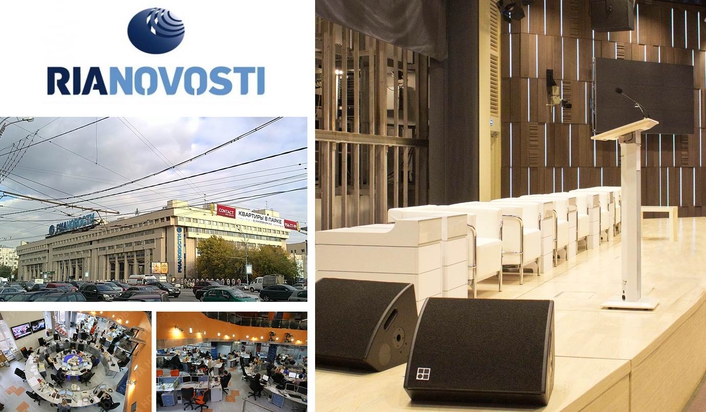 RIA Novosty buildings including a large multipurpose hall the Big Universal (BUH),
Contrary to popular belief in the West, when Russian officialdom decides something needs to be done it can and will, pull it off with alacrity and precision. "The important factor is to analyse exactly what is required, identify the correct tools to achieve this then implement it." Alexander Fetisov talking about a complete refit of RIA Novosty, Russia's largest and most significant news agency.

A comparison to the BBC World Service might give a fair insight, RIA Novosty broadcasts in Russian and five European languages, producing programmes focussed upon political, social, economic, scientific and financial information. As was said, a significant presence in communications media. The fact that the first enquiry came across Fetisov's desk in July 2010 and handover to the Government Committee responsible followed in June 2011, just eleven months later, indicates the speed with which this project was assessed, contracts awarded, and then completed.

"The tasks of the agency also include distribution of official messages of the Russian government, ministries, agencies and social organisations," continued Fetisov. "The offices of RIA Novosty are a complex of multistoried buildings including a large multipurpose hall the Big Universal (BUH), several conference halls, apparatus rooms, operational halls, all located in the centre of Moscow." Fetisov, an electroacoustic expert, was engaged to produce a sound reinforcement solution for the BUH. "As is the nature of these large Government projects, the layers of administration were deep; the system integrator was Atlantis Communications; AVI Lab held the subcontract for sound, video and conference equipment, handing the 'sound' brief to audio specialists Aris."

Fetisov is head of Aris's installation department, "The BUH seats four hundred people and had always been used for live presentations, mainly discussion, meetings and conferencing, with the occasional concert. At Government level the brief was to provide 'nothing but the best'; I selected d&b audiotechnik equipment because their loudspeaker systems adhere precisely to what the technical specifications outline; the accuracy of the propagation patterns never ceases to amaze me, and of course they sound fantastic. The crucial factor for me was their ability to produce two things equally well; truly concert specification musical reproduction and superb speech intelligibility. The BUH isn’t a difficult room acoustically; as such the d&b T-Series solution we have implemented really shines."

Fetisov is rightfully proud of his work at RIA Novosty, since June the plaudits from presenters, users and the occasional musical performer, have been steady and all in the positive. "In many ways RIA Novosty is the voice of Russia so I am extremely pleased with the result."