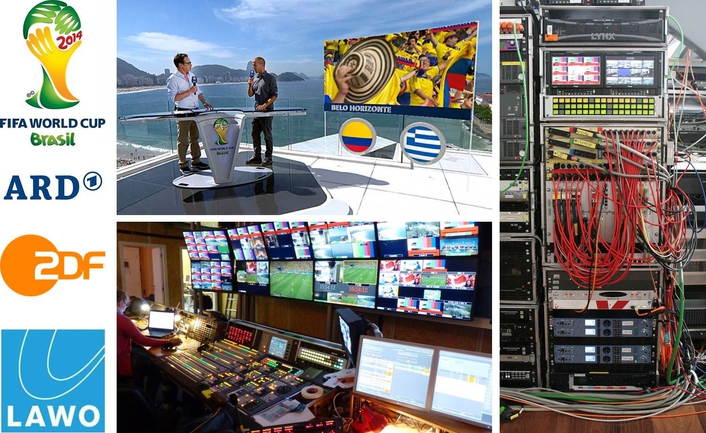 Daily Live Broadcasts with Remote Production between Studio at Copacabana and IBC at Riocentro
German national public broadcasters ARD and ZDF have been relaying live coverage from Brazil since 12 June. Accompanying TV pictures from the rooftop World Cup studio at the Copacabana are shared by both channels, and offer stunning views across Rio de Janeiro with the beach and landscape in the background. For the first time, the broadcast is being handled without an OB van on-site; instead, the entire studio delivers remote production to the main studio control room in the International Broadcast Center (IBC) 35 km away.

Signal transfer is managed by a Lawo V__link4 unit, which is used as an IP network stagebox. The 19’’/1U device – which was launched by Lawo last fall – is an all-in-one-box solution for audio and video contribution over IP as part of the infrastructure for remote production. For coverage of the World Cup from the studio in Rio de Janeiro, all audio signals are collected by the V__link4 via MADI and transferred over the IP network via RAVENNA from Copacabana to the IBC and back.

In Remote Production, the return feed from moderators is a particularly tricky task, since the delays in the network do not allow direct feedback from the mixing console. As a solution, Lawo developed a remote DSP processing unit in collaboration with engineers from ZDF and Südwestrundfunk (host broadcaster for the World Cup in Germany), which enables presenters in the remote studio to monitor their own voice without an audio delay – just as if in the main studio.

In the main studio control room being used by ARD and ZDF, sound is mixed with a Lawo mc²90 console. Whenever a presenter is on air, the desk controls the remote processing via IP network, so that the moderator listens directly to his or her own voice. Intelligent interconnections allow the so-called IFB (Interrupted Feedback) - interruptions in the program audio when talkback is activated – to function as if it were using a direct local connection in the OB truck. 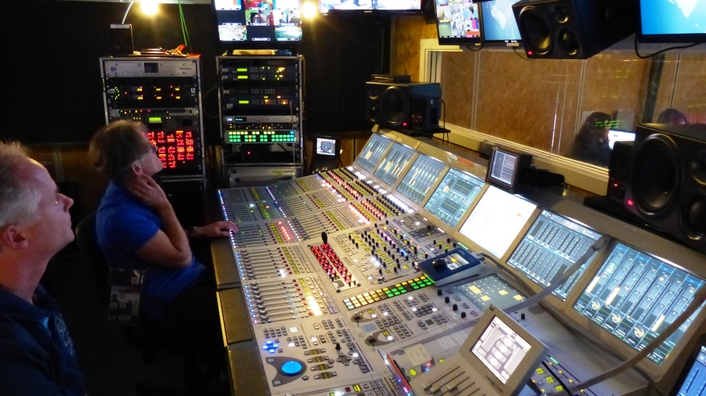 Lawo mc²90 console at the IBC in Riocentro

Using modern touch-screen operation on a tablet, mic preamp settings and attenuation values for the IFB can be switched quickly in very different situations, so that it is even possible to produce two programs in parallel at the Copacabana.

The connection via the V__link4 by RAVENNA not only manages the main audio signals, but is also responsible for all intercom channels for cameras and radio sets as well as for tallies.