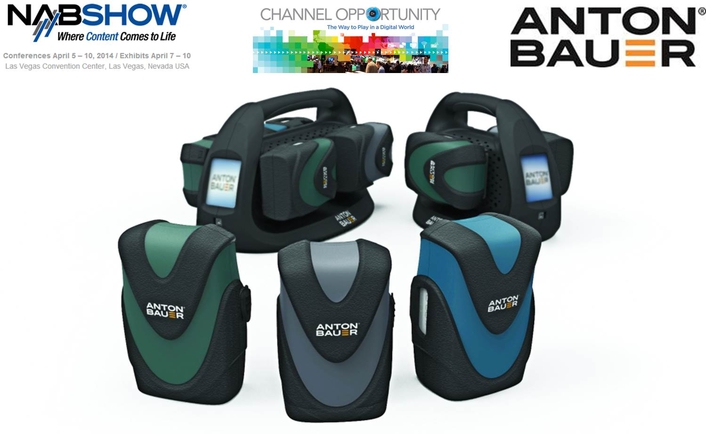 Innovative Battery and Charger Lines are Designed to Power the Digital Age
Anton/Bauer®, a Vitec Group brand and premier provider of battery, charging and monitoring technologies for the broadcast, film and video industries, will unveil its Digital Battery Series and Performance Charger Series at NAB 2014. Redefining the power standard for a new generation of cameras and auxiliary equipment, Anton/Bauer’s revolutionary Digital Battery Series is the first battery line designed specifically to power digital production for the Professional Broadcast, Cine, and Pro-video sectors. The Performance Charger Series utilizes new technology to deliver the fastest possible charging sequence, while exceeding the high-efficiency standards required by today’s rigorous shooting schedules. Anton/Bauer will showcase these ground-breaking innovations at their exhibit (booth #C6025) at NAB 2014 in Las Vegas, which runs April 7-10.

As cameras and technology have evolved, so have their power use profiles. The new Digital Battery Series meets the unique needs of 4K camera set-ups and other digital cameras in use today, while providing top-tier levels of safety, performance and reliability. Delivered with a modern, ergonomic, mold-breaking design, the battery contains a proprietary digital filter that increases run-time and lengthens life cycle, eliminating the negative effects incurred when running digital technology with traditional battery circuitry. The series will include three battery sizes (90 Wh, 150 Wh, and 190 Wh), all with Anton/Bauer’s signature Gold Mount connector and balanced, high-quality cells that deliver a long performance life.

The Digital Battery Series utilises constant calibration to deliver a truly accurate power status and features a new, easy to read fuel gauge. When the battery is attached to a load, such as a camera or a light, it will conveniently report the remaining run-time in hours and minutes, allowing the user to effortlessly track usage. If the load varies, the run-time will update accordingly. When the battery is not attached to a load, it reflects the state of the battery charge as a percentage of capacity.

The innovative Performance Charger Series supports the Digital Battery Series and features a new, efficient charging algorithm for multi-chemistry, simultaneous charging. The new algorithm ensures rapid charging of up to four batteries at a time, all while conserving energy, eliminating waste, and reducing cost of ownership. Software constantly monitors the charging process and discharge curves to ensure that each battery is charged to its peak performance. The Performance Charger series is nearly 40% more efficient than traditional chargers, rendering large power supplies virtually obsolete.

The stylish design and LCD touch screen reflect a truly 21st century system. The ergonomic chargers are easy to carry, and the batteries are easily removed from the charger, enabling smooth operation in the field. The Performance Charger series automatically detects which battery has the strongest charge and prioritizes it, ensuring that a fully charged battery is always available in the shortest amount of time possible. The new charger series also has a regulated XLR output to power a camera.

“This is the most exciting thing that’s happened to batteries for our industry in over 30 years,” says Graham Sharp, Senior Vice President of Products for Vitec Videocom. “We’re very pleased to be debuting battery and charger systems at NAB that were truly conceived to power the digital age. The Digital Battery Series is uniquely optimised for today’s cameras, as well as all of the auxiliary equipment now being powered around a camera, and the Performance Charger series is both the ‘greenest’ and most efficient charger on the market. At Anton/Bauer, we pride ourselves on not only delivering the highest levels of quality and performance, but of safety as well. These batteries were extensively tested to meet the most demanding conditions and are specially engineered to encompass numerous safety features.”

Anton/Bauer’s Lithium-Ion Digital Batteries are the safest on the market. From an electrical viewpoint, the batteries contain sensors that consistently check temperature and current, shutting the battery off if any rise in temperature or increase in current is detected. From a physical perspective, the batteries are designed to ensure that every cell in a pack stands alone, with 2 millimeters of space in between and air circulation corridors to prevent overheating. This is achieved with a unique, plastic honeycomb that creates an individual housing for each cell. With a high-impact resistant plastic molding, a double skin, and no danger of cells touching each other, thermal transfer is minimized should a battery be dropped or crushed in any way.

The high performance, competitively priced Digital Battery Series and Performance Charger Series will be available to the marketplace in the second quarter of 2014.

About Anton/Bauer
With more than 40 years of proven experience, Anton/Bauer is recognised as the world’s premier provider of multi-chemistry battery, charging, and monitoring technologies for the Professional Broadcast, Cine, Pro-video, and Healthcare industries. Established in 1970, Anton/Bauer’s product offerings include several signature lines, including the leading Gold Mount® system, InterActive® chargers, and T-Series chargers. The company’s industry standard products are compatible with every camera brand on the market today. The brand’s main office is in Shelton, CT, with additional offices in South America, Europe, and Asia.