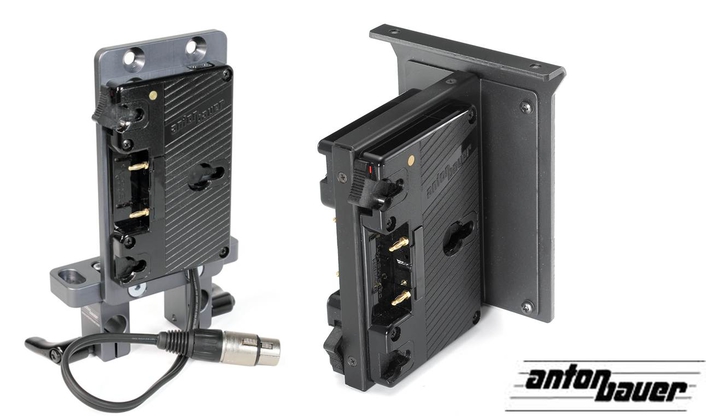 MATRIX Cheese Plate and Gold Mount Hot Swap
Anton/Bauer®, a brand of The Vitec Group, and the world’s premier provider of batteries, chargers, lighting and other mobile power systems for the professional broadcast, video and film industries, demonstrated the advanced capabilities of its power solutions to European broadcast and video professionals at this year’s 2011 IBC Show.

The MATRIX Cheese Plate mounts directly on 15mm or 19mm rod systems (15mm or 19mm clamp kits sold separately), to allow for easy mounting of a variety of Gold Mounts including:

These Gold Mount solutions can also be used on support rigs such as Cinevate, Shape, Redrock Micro and Genus, among others, and in some cases, a pouch.

Anton/Bauer®, also introduced new Gold Mount® Systems for the ARRI ALEXA digital cinema camera and RED digital cinema cameras.The QR-HotSwap-AR for the ARRI ALEXA, and the QR-RED for the RED ONE are innovative Gold Mount Solutions with superior communications, the direct result of Anton/Bauer’s strong relationships with the industry’s top camera makers.

“Anton/Bauer has strived to develop collaborative working relationships with ARRI and RED in order to be able to offer the finest battery to camera communication to digital cinema pros,” says Paul Dudeck, vice president of sales, Anton/Bauer. “Other battery manufacturers are not able to offer the same advanced capabilities and synergy between the products because top camera company’s trust the quality and dependability associated with the Anton/Bauer brand.”

Offering a secure snap-on approach to keep the battery in place from any position, the Gold Mount provides three solid mechanical connections that “lock” into place, allowing secure contact for a steady stream of uninterrupted power, and self-cleaning gold-plated pins rated for high-current. The QR-HotSwap-AR allows for either two DIONIC HC or DIONIC HCX batteries for seamless hot swapping and longer run-times. Working closely with ARRI, Anton/Bauer offers ARRI tested and approved communication with the ALEXA, for the QR-Hotswap-AR, which shows the combined batteries’ remaining run-time via the InterActive® Viewfinder Fuel Gauge, displaying communication directly to the camera’s LCD.

"Many of our customers use Anton/Bauer batteries with the ALEXA cameras, and they are very impressed with the reliability and built-in quality of the batteries, as well as the wide range of battery and accessory options available," says M. Shipman-Mueller, product manager, cameras and lenses, ARRI.

The Anton/Bauer Gold Mount System is the most widely used battery mounting system in the industry, providing an interchangeable battery system using a forward-compatible approach originally developed by the company. This system allows for new cell chemistries as they are developed, enabling a battery introduced today to perform seamlessly on a current charger purchased 10 years ago, with only a simple firmware upgrade. Anton/Bauer, the only battery manufacturer authorized by RED for communication, offers the QR-RED for the RED ONE which displays the batteries’ remaining run-time via the InterActive® Viewfinder Fuel Gauge, displaying communication directly to the camera’s LCD.

“Anton/Bauer has worked closely with both manufacturers to develop superior battery-to-camera communication,” says Shin Minowa, vice president of marketing and business development, Anton/Bauer. “When shooting on location with the ARRI or RED, the most sought after cameras in all of digital cinema, Anton/Bauer’s Gold Mount users can have confidence in the most asked question — ‘how much power do I have left?’”