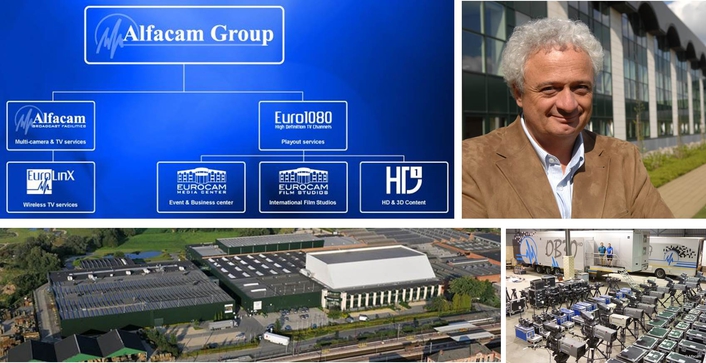 The Alfacam Empire
Outside broadcasting specialist Alfacam is operating under the Belgian version of Chapter 11 (‘judicial protection’) while it seeks a financial rescuer. A Board statement says (March 29) that the negotiations with India’s Hinduja Group in order to find a structural solution for the group are progressing “in difficult circumstances. A final outcome is expected shortly. Negotiations are also held with other potential investors.”

Alfacam’s Board has called an Extraordinary General Meeting for April 12, and ahead of an obligatory April 15 filing of the company’s reorganisation plan. Alfacam has been operating under Chapter 11 since October 2012, but that protection ends on May 5.

Alfacam also reported its latest financial numbers. While revenues have more or less recovered to €42.5 million (2010 €44.5m, 2011 €33.2m) the company, which specialises in capturing Outside Broadcast sports events, and it benefited from covering part of last year’s Olympic Games in London, it also reported that some €1.5 million of its profits came from the sale of two OB trucks (OB20 and OB37).

Alfacam issued a formal notification April 3 saying that its banks on April 2 had decided “not to extend the standstill indebt repayments (granted until 31 March 2013). All the credit lines granted by them to Alfacam Group were cancelled at the same time.”

The statement continued: “Due to the urgency of the situation, Alfacam Group will now try to accelerate and finalize the negotiations with one of the candidate investors in order to find as matter of urgency a structural solution for the continuity of the Group.”

Its share price instantly fell by some 34 percent to 65 Eurocents.

India’s Hinduja Group had been in discussions with Alfacam about a rescue package, but those talks seem to have stumbled. The company has tabled an Extraordinary General Meeting for April 12. It must file a formal reorganisation plan with Belgium’s company regulation.

However, Alfacam has also re-valued its real estate and other fixed assets and has marked them down by €9.8 million which helped deliver an overall net loss of €21.8 million compared with €13.9 million in 2011.

Nomination and remuneration committee
The nomination and remuneration committee consists of at least three directors, which have to be non-executive and the majority of whom are independent directors:
• HRV nv, represented by Mr. Hugo Vandamme (chairman)
• Kiruna nv, represented by Mr. Luc Van Milders
• Mr. Alain Keppens (chairman)