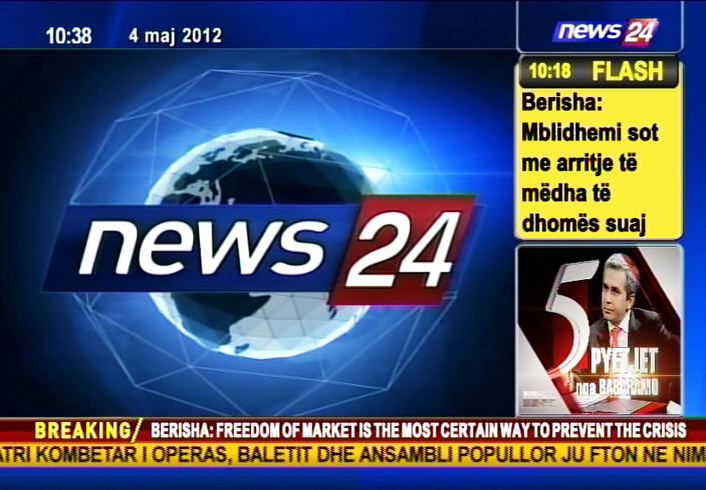 "We have achieved fantastic results with Channel Box² and LEX³.¹. With a single computer, we can now perform the job that three separate systems and three different software licenses were doing before — and with absolute top-quality results," said Arianit Filopati, director of production, News 24. "The Chyron systems have accelerated uploading and delivery of news to air, and since our journalists are spending much less time on graphics presentations, they can focus on their real work of gathering and delivering the news. With Chyron, our news broadcasts now have the most professional look of any in Albania."

News 24 is Albania's first 24-hour news channel and currently commands the largest market share for news broadcasting. Chyron's Channel Box² and LEX³.¹ replace previous graphics systems that had been in place since 2002. These systems required three separate PCs for generating crawls, news subtitles in Albanian and English, and main titles for the live broadcast. Many graphics creation and data input tasks had been manual and time-consuming, requiring up to five journalists to cut and paste each set of data into the user interface.

By upgrading its equipment to the Chyron systems, News 24 was able to streamline many graphics and data input tasks. Deployed to facilitate the station's channel branding, Channel Box²'s automated data handling capabilities and data gateways enable seamless import of news and graphical data — accelerating workflows for delivering news broadcasts to air. From one single Channel Box², the News 24 team is able to generate and playout 13 different graphical components that are broadcast day and night, including text, crawls, video DVE, animated logos, hour and date, and various clips in support of the current news topic.

"The Albanian television industry is rapidly advancing and becoming extremely competitive. News 24 is committed to maintaining its market leadership by adopting leading-edge technologies — and one component is the ability to deliver a highly sophisticated on-air presentation that easily outclasses the competition," said Viktor Tatai, regional sales manager at Chyron. "By adopting Chyron's Channel Box² and LEX³.¹, News 24 has taken a significant step forward with systems that simplify workflows and accelerate delivery of highly complex and professional graphics components that complement news content."