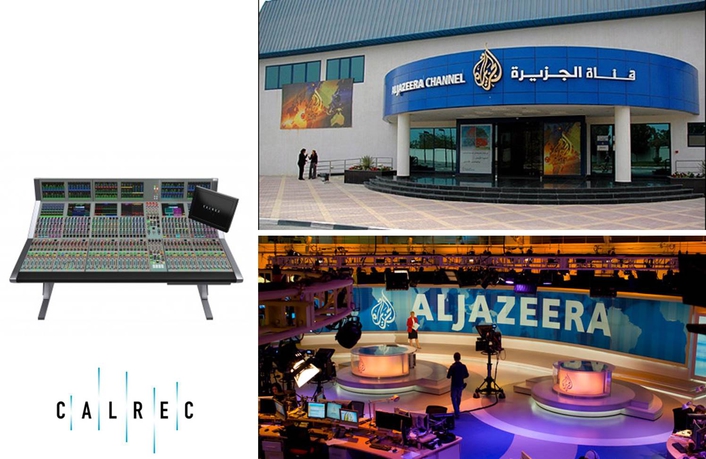 ... and Creates Largest Hydra2 Network in the Middle East
In a move to upgrade and standardize its global operations, Al Jazeera Media Network has purchased seven Apollo digital audio consoles from Calrec Audio for its broadcast facility in Doha, Qatar.

The purchase is part of a full modernization of the Doha facility, which houses 24-hour operations for Al Jazeera's English, Arabic, and Mubasher channels. The purchase marks the largest Apollo deployment in the Middle East and with it the creation of one of the world's largest Hydra2 networks.

"Al Jazeera Network is a fast-paced environment with no room for error and a desire for the highest standards. Extensive research and planning is needed to ensure we install equipment to meet these demanding requirements," said the lead audio specialist for Al Jazeera Network and the project, Allie Gaffoor.

"We decided to use Calrec as our global standard for audio because we needed a reliable console for our 24/7 environment, ease of operator use, and longevity. Calrec meets our networking and I/O needs, and Calrec's Bluefin2 and Hydra2 technologies fit our requirements exactly."

Abdulaziz Ghazi Al Dosari, sound supervisor at Al Jazeera said, "Calrec's Bluefin2 technology gives us plenty of horsepower and that gives us peace of mind that the desks will be able to cope with future technological developments.

"At the same time, Calrec's Hydra2 networking and routing system gives us a powerful management tool that increases network-wide control over many parameters, and ensures our I/Os can be available in any audio control room."

This level of flexible networking is particularly important to this new facility. Hydra2 gives Al Jazeera the capability to build adaptable networks quickly, easily, and reliably, ensuring that inputs are available on the desired consoles and patched directly to multiple destinations. It was also important that the Apollo consoles integrate with third-party equipment and control protocols.

"These features will not only improve our content, but will prepare us for the increased workload of HD broadcasting, whatever the magnitude," said Amr Mohey, senior sound engineer with Al Jazeera Arabic Channel. "Intuitive physical controls, color-coding, TFT displays, elegant touch screens, the spectrum of control parameters, and fader scales adjacent to the fader all give us faster, easier, and more ergonomic ways to drive a much greater number of channels, tracks, busses, and outputs. With these desks we will be able to control more digital audio channels at ever-higher resolutions."

"Al Jazeera is among the world's most watched news outlets and broadcasts in multiple languages and regions. Now this broadcasting giant will rely on the most powerful and flexible audio network on the market, Hydra2," said Anthony Harrison, international sales manager at Calrec Audio.

"By standardizing facilities using Calrec's Hydra2 network, all of Al Jazeera's consoles in Doha will be networked together so that its engineers can share resources and move easily between locations within the organization. This setup will give Al Jazeera much more operational flexibility and, thanks to Hydra2's plug-and-play nature, scalability well into the future."