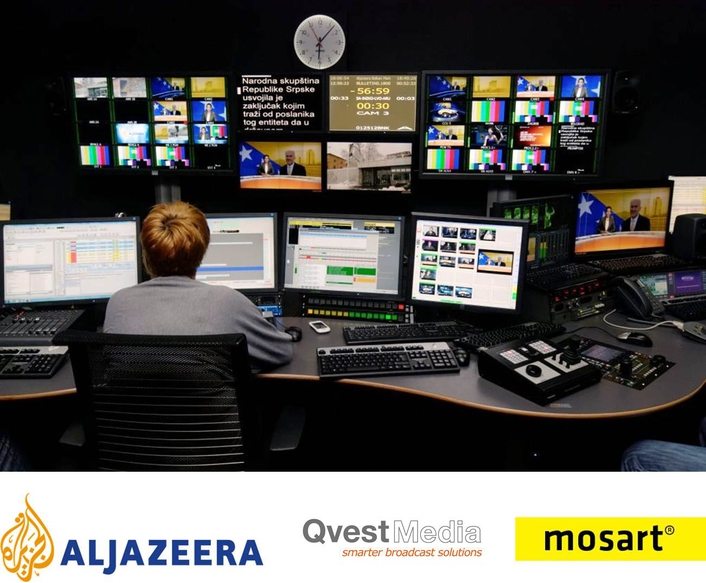 Mosart is the only open newscast automation capable of working with all major video switchers
Al Jazeera Balkan, the newest addition to the Qatar-based broadcaster's international portfolio, has gone live with the Mosart® newscasting system at its Sarajevo news studio. The first of Al Jazeera's channels to base its news studio around Mosart, Al Jazeera Balkan broadcasts at least six hours of news per day, with a remit to provide objective coverage of events to audiences across the former Yugoslavia in their own languages.

Specified by project integrators Qvest Media for a news production facility that includes Sony cameras, a Snell video mixer, Vizrt graphics and an Avid iNews newsroom system, the Mosart newscasting system provides Al Jazeera with multifunctional studio control to streamline workflow, while enabling very high production quality. The all-new file-based studio infrastructure has been designed to facilitate speedy and efficient production processes, and the exceptional control and flexibility of the Mosart system will allow gallery staff to adapt easily to extended broadcasting hours when the station increases its on-air schedule.

"Using the Mosart system means we can run a very high quality news production with a small gallery team, while still being able to respond instantly to breaking news," said Miljenko Logozar, chief technical officer for Al Jazeera Balkan. "Setting up for the launch with a completely new studio infrastructure meant our staff had a lot to learn, and the Mosart system has been invaluable in simplifying a major part of the workload. It also means that we can readily scale up our news schedule because we don't have to train a lot of new staff for the extra hours on air." 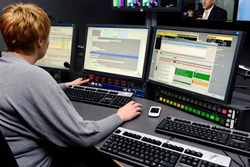 With its open-standards ability to integrate with the widest range of studio equipment, sophisticated device control, and ability to make powerful concurrent event triggering simple for the operator, Mosart has been adopted for newscast automation by many of Europe's most prestigious broadcasters and news operators, including Sky, the BBC, YLE, N24, ARD-aktuell, and NRK.

Mosart is the only open newscast automation capable of working with all major video switchers (Snell, Grass Valley, Sony, and Ross), news production systems such as ENPS, iNEWS, Open Media, Dalet, Octopus, and NorCom, and most other widely adopted brands of vision mixer, video servers, graphics systems, and camera robotics systems. Mosart is based on open system IT standards and interfaces, and uses a story- and template-based architecture, which allows the broadcaster to change or add broadcast hardware devices without modifying rundowns, changing show configurations or replacing the automation. Mosart runs on commercially available high reliability client/server hardware, and a fully redundant architecture is achieved through server hot-switching and duplicated graphical user interface clients.

"As one of the world's fastest-growing and most forward-looking TV networks, Al Jazeera sets the highest technical standards," said John Kjellevold, managing director, Mosart Medialab. "By creating a state-of-the-art news facility based around the Mosart system, Al Jazeera Balkan has set the benchmark for productive, high quality news broadcasting, and we are delighted that they have joined the rapidly growing band of Mosart users."

About Al Jazeera
Al Jazeera is an independent broadcaster owned by the state of Qatar through the Qatar Media Corporation and headquartered in Doha, Qatar. Initially launched as an Arabic news and current affairs satellite TV channel, Al Jazeera has since expanded into a network with several outlets, including the Internet and specialty TV channels in multiple languages. Al Jazeera is accessible in several world regions.

About Mosart
Mosart Medialab is a subsidiary of TV 2 Norway and one of the cluster of technology spin-offs originating from TV 2, including Vizrt, StormGeo, Vimond, and Wolftech. Mosart Medialab develops and markets the Mosart® automation system for news, sports, weather, and live broadcasting applications. Conceived in 2002 at TV 2 by professional news directors, producers, and editors, Mosart meets the demands of live production by simplifying workflow and control, eliminating operational errors, and providing a highly flexible environment for ad hoc operation. High-level gallery control is combined with a sophisticated user interface, making it easy to override the schedule and improvise when breaking news demands instant response. Open-systems architecture ensures industry-leading compatibility with the widest range of third-party systems. Mosart is used for prime-time shows and 24/7 operations by major broadcasters. Mosart is Europe's market leader in studio automation. ARD, BBC, SKY, N24, TV2 Denmark, SVT, YLE, Global TV, and NRK are a few of its customers.