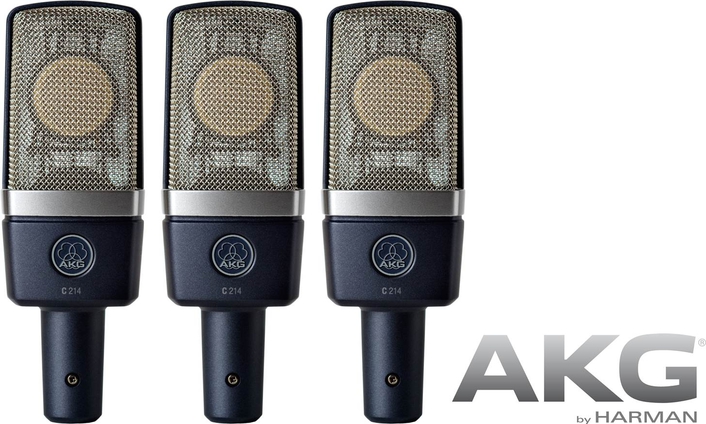 .
HARMAN’s AKG announced that its C214 microphone has been the best-selling condenser microphone for studio and stage in the United States over the past 12 months. From October 1, 2013 to September 30, 2014, no other condenser microphone generated more revenue, as the C214 found its way into countless projects, ranging from home recording studios to international concert tours and everything in between.

The C214 is a tremendously popular recording microphone, delivering a similar sound character as the legendary C414 XLII microphone. However, thanks to its robustness and world-class sound quality, it is also popular as a live microphone, having been used on tour by Dave Natale, Dweezil Zappa, Steve Vai, and others. As further evidence of its versatility, the C214 is also part of AKG’s Drum Set Premium.

Designed as a cost-effective alternative to the high-end C414 family, the C214 large-diaphragm condenser microphone offers a supreme one-inch capsule on an integrated suspension to reduce mechanical noise. It also features a high-performance spider-type shock mount, windscreen and is sold in a heavy-duty aluminum case. In addition, AKG offers two C214 microphones in a Matched Stereo Pair bundle to delivering stunning performance in recording and live settings.

“Having developed and manufactured the C214 in Vienna—a city known for its rich musical history—we here at AKG are thrilled about the microphone’s popularity among leading musicians in the studio and on stage,” said Erich Gaertner, Product Line Manager, AKG. “We are looking forward to continued success with the C214 and will continue developing world-class microphones for the recording and performing communities!”